Cook Islands stamp appears with unlisted surcharge and no explanation 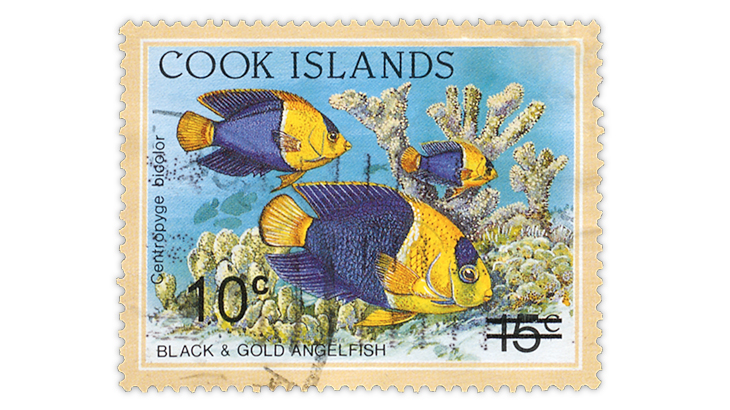 The Cook Islands 10¢-on-15¢ Black and Gold Angelfish surcharged stamp is not listed in the Scott catalog. The stamp poses more questions than answers about its existence.

One of the more interesting aspects of handling the new stamp issues for the Scott catalog is the occasional research project that comes out of the blue.

In 2016 a collector from Washington, after a thorough search of the Cook Islands listings, sent a letter inquiring if an example of Cook Islands Scott 1158, a 15¢ stamp from 1994 depicting the black and gold angelfish, had been listed with the stamp bearing a 10¢ surcharge.

The collector graciously allowed us to keep the off-cover stamp that is pictured here. It has an indistinct cancel, a bent upper-right corner and damage to the back of the stamp. The collector told us he had a better example saved for his collection.

In the Scott Standard Postage Stamp Catalogue listings for the 1994 Cook Islands Living Reef set with buff border (Scott 1154-1176), I saw no footnote directing the user to any later surcharges.

Knowing that sometimes a “see also” note may not have been included, I searched through the subsequent Cook Islands listings and could not find such an item.

The distribution of new stamps does not always run like clockwork, and there is always a possibility that a collector has found a stamp that somehow fell through the cracks and was never sent to us. This happens far more frequently than one might think.

Because the surcharged stamp lacked a distinct dated cancel, about the only thing I could say about it was that it was produced some time after 1994, when Scott 1158 was issued.

When I encounter a stamp that does not indicate when it was produced, I consult other stamp catalogs of the world. I went to our library and pulled out the British Stanley Gibbons catalog that had Cook Islands listings. They list the basic 15¢ stamp from 1994, just as we do. The Gibbons catalog lacks any footnote that points to subsequent surcharges, but a search through their later listings showed that they had not listed this surcharged stamp either.

The 15¢ stamp was also listed in the German Michel catalog, but no 10¢-on-15¢ surcharged stamp.

I searched through the French Yvert and Tellier catalog and came up with the same result.

The consistent results from these searches through various catalogs led me to dig deeper for more information.

I asked Chris Lazar of Philatelic Collector Inc., the sales agent for Cook Islands, if he knew anything about this stamp. He said that he had not sold it during his years acting as the Cook Islands agent. Lazar went the extra mile to determine if the stamp was created by Cook Islands and sold by the previous agent, Finbarr Kenny. But after searching through the records he received from Kenny’s firm after taking over as agent, Lazar found no records that would indicate that the stamp was printed.

Lazar also stated that there no longer was anyone still working for the Cook Islands Philatelic Bureau who had worked there during the time Kenny was agent.

He also inquired with the Cook Islands postmaster about the stamp, but the postmaster knew nothing about it.

I also made a direct inquiry about the stamp with the Cook Islands postal officials and received a response that confirmed what Lazar said.

Lazar understood our reluctance to list in the Scott catalog a stamp that had no record of being printed or offered to collectors, no status in any catalog and was not shown to us affixed to a cover.

If we had seen the stamp on a commercial cover we probably would have no qualms about listing it, despite its lack of a listing in any other catalog. However, commercial covers franked with modern stamps of the Cook Islands are seldom seen.

I did not think much about this stamp after we got the information from Lazar. I wrote the Washington collector who sent us the stamp to let him know about what we found out. I tossed the letter in my mail basket, still hoping that one day we might come up with more information about it.

That letter sat in the basket for a few years until a few weeks ago, when I packed up everything on my desk for the move to our new location. I tossed that basket on my file cabinet in our new office space, pawed through the basket again on Sept. 15, and saw that letter.

With a synchronicity that I find a bit weird and spooky (because such things have happened to me here on a number of occasions), the very next day I received an e-mail from an American collector who is currently working in Africa. He sent a scan of items he had received in kiloware. Naturally, there were about a dozen African stamps, but on that scan is one stamp not from Africa.

It is yet another example of this same Cook Island surcharge, again off cover with an indistinct cancel.

What makes this so bizarre is that we rarely see any examples of any used modern Cook Islands stamps. Cook Islands has a population under 18,000, and the residents of Aitutaki and Penrhyn have stamps of their own to use.

With such a small population, the Cook Islands does not strike me as a country that is generating a whole lot of mail. One would think that a Cook Islands cover would be scarce enough, and that a stamp on cover would be worth more than one off cover.

One would also think that genuine used Cook Island stamps would not be the kind of stamps one ought to encounter in kiloware. Yet I know of three examples with cancels of this one surcharge — having a low face value, to boot — a stamp that has not been listed by any catalog.

I have not seen an unused example of this stamp, or one used on cover. All of this just flies in the face of whatever logic there ought to be in the philatelic universe.

So, if anyone can show us this stamp on a commercial cover, we would love to see it.

Martin J. Frankevicz is the Scott New Issues editor. His email is mfrankevicz@amosmedia.com. Postal mail can be sent to his attention at Scott Catalog Editorial, Box 4129, Sidney, OH 45365.