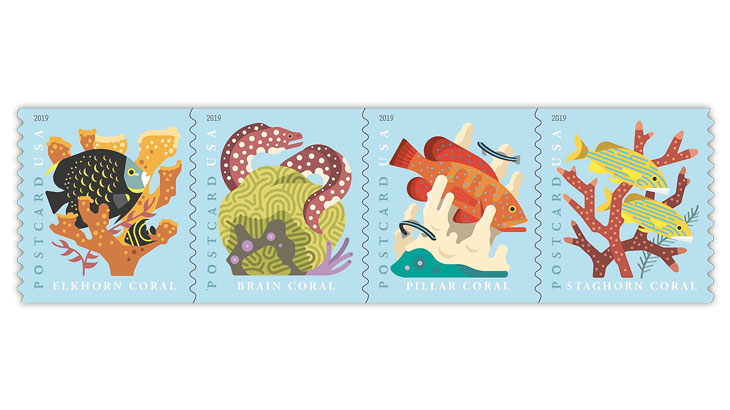 The United States postcard-rate Coral Reefs stamps will be issued March 29 in coils of 100 and panes of 20. 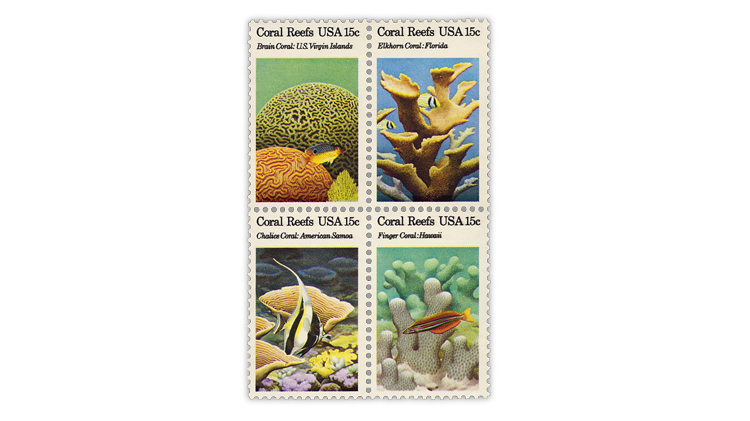 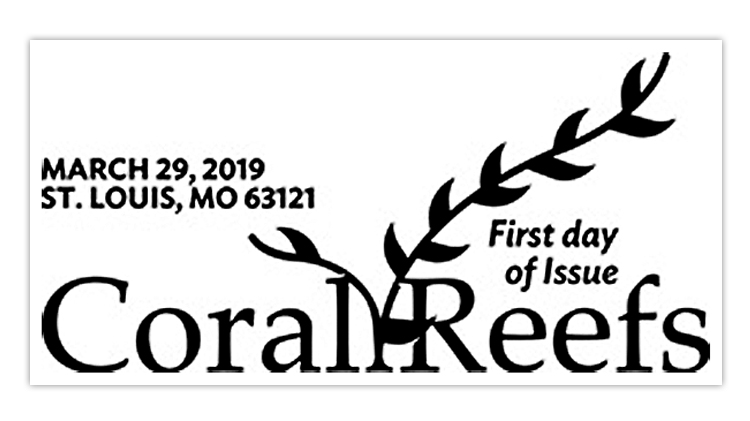 The Coral Reefs stamps pictorial first-day cancel is offered in black only.
Previous
Next

The nondenominated (35¢) postcard-rate stamps will be issued March 29 in St. Louis, Mo., in coils of 100 and panes of 20, with four different digitally created designs. Each stamp shows a different type of stony coral along with associated reef fish.

The name of the coral is printed across the bottom of each stamp, but the fish are not identified with text.

Reading up along the left side of each stamp is “POSTCARD” and “USA.” The year 2019 is printed in the upper left corner of each stamp.

The stamps were designed and illustrated by Tyler Lang working with USPS art director Ethel Kessler.

A first-day ceremony for the new stamps is scheduled for Friday morning at 9:30 a.m. in the Gatwick Room of the Renaissance Hotel, as part of the St. Louis Stamp Expo taking place there March 29-31.

Most coral reefs are found in tropical and semitropical waters, including off the coasts of Hawaii, Florida, Texas and Puerto Rico. The Virgin Islands Coral Reef National Monument consists of 12,708 marine acres, according to the National Park Service. Reefs are also found in U.S.-associated regions such as American Samoa, Guam and the Northern Mariana Islands, and in other marine expanses around the world.

Many coral reefs are endangered by multiple threats, including pollution and global climate change, according to the National Oceanic and Atmospheric Administration, which supports the Coral Reef Conservation Program.

“Coral reefs are formed over thousands of years mainly by colonies of animals called polyps,” the U.S. Postal Service reports. “Polyps make stony corals, the foundation for most coral reefs, by secreting protective skeletons of calcium carbonate, or limestone. As these limestone skeletons accumulate over time — with new colonies of polyps growing on top of the skeletons of older ones — they build up the base of coral reefs.”

This is the second set of Coral Reefs stamps in four designs offered by the Postal Service. The first, a set of four 15¢ commemorative stamps, was issued in panes of 50 on Aug. 26, 1980, in Charlotte Amalie, Virgin Islands (Scott 1827-1830).

A set of 10 37¢ Pacific Coral Reef stamps was issued in a single pane on Jan. 2, 2004, and features several varieties of coral, including staghorn coral and mushroom coral (Scott 3831).

The most recent previous issue of U.S. postcard-rate stamps was also offered in coils of 100 and panes of 20, and features designs showing four different shells (Scott 5163-5170). These nondenominated stamps were issued Jan. 28, 2017, in San Diego, Calif., and are still available from many post offices and USPS Stamp Fulfillment Services.

The Postal Service has revealed a black pictorial first-day cancel for the new Coral Reefs stamps. The postmark includes the phrase “Coral Reefs” in large letters across the bottom, with a silhouette of a sea plant growing out from between the two words.