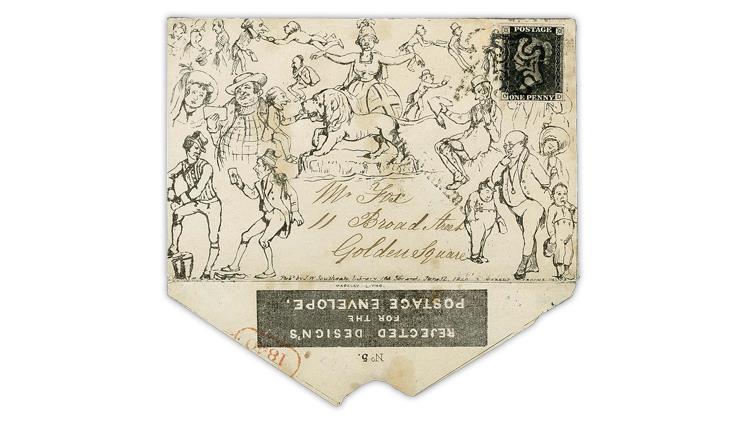 The June 7-12 Corinphila sale in Zurich, Switzerland, includes part 3 of the Besancon collection, which comprises 1840-1910 issues of Great Britain. One gem to cross the auction block is this 1840 Mulready caricature envelope franked with a Penny Black. A 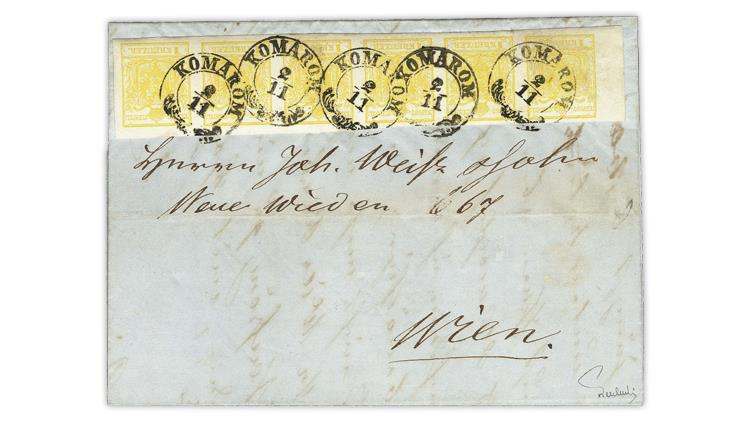 Corinphila’s auction of the third part of the extensive Erivan collection features Austria and Lombardy-Venetia. A highlight of this June 10 sale is an 1856 folded letter franked with a right margin strip of six of Austria’s 1850 1-kreuzer cadmium yellow
Previous
Next

Corinphila, the Swiss philatelic auction house, will auction stamps and postal history from the Besancon and other important collections June 7-12 at its Zurich gallery.

The six-day sale will include nine separate catalogs offering the following material: the Everaldo Santos collection of 1606-1886 South American maritime postal history, selections from North America, Central America and South America, and part 1 of the Alpaca collection of Peru (June 7);

Selections from Asia and Africa, including the Juha Kauppinen collection of Ethiopia (June 10);

Part 3 of the Erivan collection, featuring Austria and Lombardy-Venetia (June 10);

And selections from Switzerland and Liechtenstein (June 11-12).

A nice selection of zeppelin covers is included in the June 7 offerings. One of the more attractive is a postcard carried aboard the May 18 to June 6, 1930, South America Graf Zeppelin flight. The card is franked with two Brazilian stamps: a 1930 5,000-reis green airmail semiofficial with a “Graf Zeppelin U.S.A.” overprint (Scott 4CL8) and a 200r olive green Aviation definitive (248).

Both stamps are tied to the card by a clear strike of a May 24, 1930, Rio de Janeiro circular datestamp. An airmail etiquette (label) is also affixed to the front of the card. The label reads “By ‘CONDOR’ Airmail in BRAZIL/Par Avion ‘CONDOR’ en Bresil.” A green decorative backstamp shows the cover arrived at Lakehurst, N.J., on May 31.

In its lot description, Corinphila draws attention to the airmail semiofficial because it bears a double overprint.

A 1985 expertizing certificate issued by Hermann Walter Sieger accompanies this Graf Zeppelin cover, which Corinphila is offering with a starting bid of 500 Swiss francs, roughly $555 in early May.

For comparison, an on-cover example of Brazil’s 1930 5,000r green airmail semiofficial with a normal “Graf Zeppelin U.S.A.” overprint is valued at $150 in the 2021 Scott Classic Specialized Catalogue of Stamps and Covers 1840-1940.

Up for bids June 9 in the third part of the Besancon collection featuring Great Britain 1840-1910 are a handful of attractive Mulready envelopes. Named for their designer, William Mulready, these envelopes were issued coincident with the world’s first adhesive postage stamp in 1840, the 1-penny black Queen Victoria that collectors affectionately call the Penny Black.

One of the used envelopes in the sale features the Mulready caricature known as Southgate No. 5 and is franked with a Penny Black from plate 3. The stamp is tied by a bold, black Maltese Cross cancel. A backstamp indicates the cover arrived at its Golden Square, London, destination on Oct. 1, 1840.

Corinphila illustrates the envelope with the flap opened out at bottom to show the “Rejected Design’s For The Postage Envelope.” imprint on the flap.

Some staining has been removed from the cover, and there is a “light vertical file fold well away from the [stamp] which has been lifted for checking and replaced,” according to Corinphila.

Certificates issued in 1996 and 2019 by the expert committee of the British Philatelic Association state that the cover is genuine.

This handsome Mulready caricature envelope franked with a Penny Black is listed with an opening bid of 3,000fr (approximately $3,325).

The third part of his extensive collection, which features Austria and Lombardy-Venetia, is offered June 10 in 98 lots and presents bidders with an opportunity to acquire important items of postal history in remarkable condition.

Among the highlights is an 1856 folded letter mailed from Hungary to Vienna, Austria, franked with a right margin strip of six of the Austrian 1850 1-kreuzer cadmium yellow Coat of Arms (Scott 1e).

According to Corinphila, the strip is “intensely colored” and possesses “broad to huge margins on all sides.”

The strip is canceled with five strikes of a Nov. 2 (1856) Komarom, Hungary, circular datestamp, four of which tie the stamps to the letter along the bottom of the strip.

A clear backstamp shows the cover arrived in Vienna one day later, on Nov. 3.

Corinphila notes that a 2004 expertizing certificate from Ulrich Ferchenbauer accompanies the cover, which once resided in the collection of Anton and Elisabeth Jerger.

The Scott Classic Specialized catalog values a single 1kr cadmium yellow Coat of Arms stamp on cover at $500. Corinphila is offering this folded letter bearing a strip of six with a starting bid of 5,000fr (approximately $5,500).

The concluding sale on June 12 offers more than 1,100 lots of Switzerland, one of which is a mint, never-hinged bottom half sheet of the 1891 1-franc claret Standing Helvetia printed on paper with the type II cross in oval watermark (Scott 87a).

Corinphila is offering this large Standing Helvetia multiple with an opening bid of 3,000fr (approximately $3,325).

Details of these auctions are provided on the Corinphila website, including online listings for the material in all nine auction catalogs, as well as PDF catalogs that can be individually downloaded. Online bidding options are available.