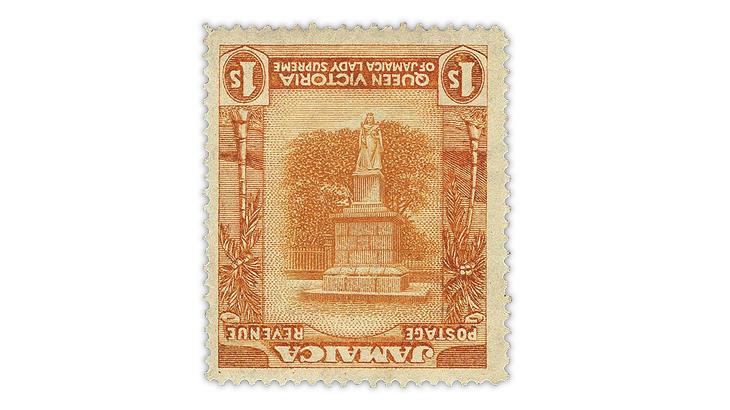 The May-June Corinphila auction series in Zurich, Switzerland, features part 3 of the Besancon collection of the British West Indies. Among the many splendid stamps up for bids in this May 27 sale is an unused Jamaica 1920 1-shilling bright orange and ora 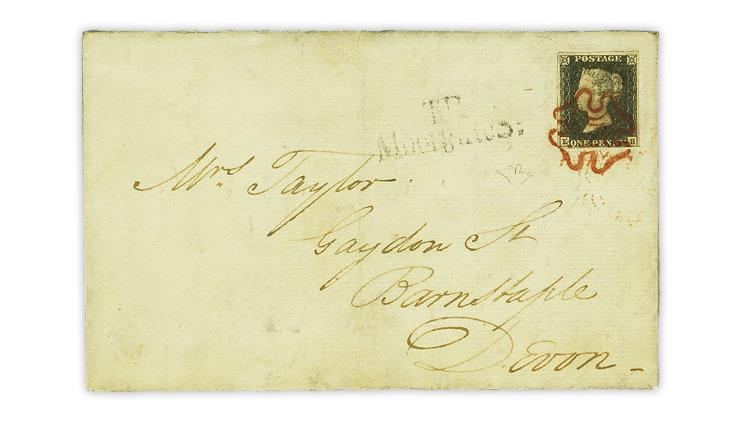 Corinphila’s extensive May 30-June 2 auction of Europe and overseas stamps and postal history includes this attractive May 7, 1840, folded letter franked with a Penny Black, the world’s first postage stamp. The contents of the letter mention “the new syst
Previous
Next

Corinphila, a Swiss philatelic auction house, will present stamps and postal history from the Besancon, Erivan and other important collections May 27 and May 30-June 4 at its Zurich gallery.

One of the highlights of the offerings from the Besancon collection of the British West Indies is a well-known error from Jamaica: an unused 1920 1-shilling bright orange and orange Statue of Queen Victoria stamp with the frame inverted (Scott 83a).

The stamp has a minor gum wrinkle and a large part of its original gum, which is slightly browned, according to Corinphila.

Just 10 examples of this error are known in unused condition, one of which is in the Royal Philatelic Collection held by Queen Elizabeth II.

In March 1922, examples of this error stamp were purchased at the post office in Manchioneal, a small village in Jamaica that had received a half sheet of 30 1sh stamps.

According to Corinphila, the Manchioneal post office had not received an invoice for a complete sheet of 60. “Some stamps from the same sheet had already been sold, unnoticed, in Kingston,” Corinphila said.

Additional details about the 1920 1sh Statue of Queen Victoria invert are provided in Stamps of Fame by L.N. and M. Williams and Philatelic Gems by Donna O’Keefe.

The Scott Classic Specialized Catalogue of Stamps and Covers 1840-1940 values Scott 83a unused at $40,000 in italics to indicate an item that can be difficult to value because it trades infrequently in the philatelic marketplace.

Corinphila is offering this 1920 1sh Statue of Queen Victoria invert with a starting bid of 15,000 Swiss francs, approximately $15,200 in early May.

Among the more than 400 lots of Great Britain and British Commonwealth in the May 30-June 2 Europe and overseas sale is a May 7, 1840, folded letter franked with a Great Britain 1-penny black Queen Victoria stamp (Scott 1). The world’s first adhesive postage stamp, it is known to collectors far and wide as the Penny Black.

Cherrystone notes that the stamp is an early impression from a plate 1A printing. It bears the check letters “E” and “B” in the bottom left and bottom right corners, respectively. These letters indicate the stamp comes from the second position in the fifth row of 12 stamps in the 240-subject sheet.

A bold strike of a red Maltese Cross cancel ties the stamp to the cover, which is addressed to “Mrs. Taylor Gaydon St. Barnstaple Devon.”

Of particular interest are the contents of the letter, which describe the stamp and the new method of prepayment of postage. Corinphila provides the following excerpt from the letter:

“London 7th. May 1840, Dear Madam, to show you the new system of postage, I send you a line with one of the new stamps which avoids the trouble of paying. The stamps I understand are at present only available in London, but I hear that you will have them very shortly in the country ... [signed] Henry Spring.”

The writer’s focus on the Penny Black is understandable because it was issued May 6, the day before the letter was written and mailed.

Mike Jackson, in his 1999 book May Dates, illustrates the cover and provides a detailed description. The cover is signed by noted expert Enzo Diena and accompanied by his 1995 certificate. A 2021 Giacomo Bottacchi certificate is also included.

Details of these auctions are provided on the Corinphila website, including online listings for the material in all seven auction catalogs, as well as PDF catalogs that can be individually downloaded. Online bidding options are available.