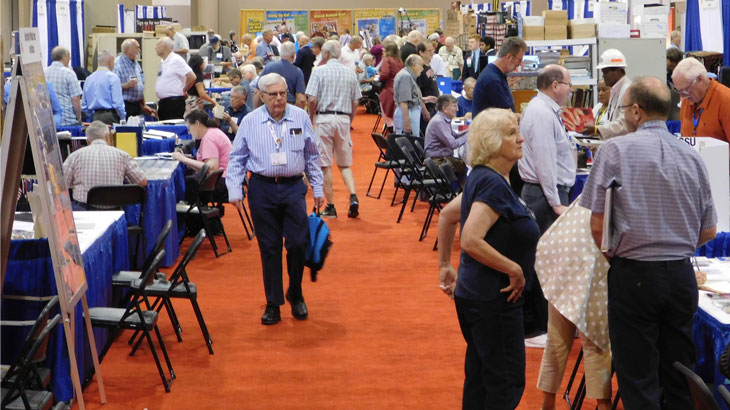 Stamp collectors gathered last year in Omaha, Neb., to enjoy the combined annual shows of the American Philatelic Society, the American Topical Association and the American First Day Cover Society. The APS announced May 22 that its newly named Great Ameri

The official debut of the Great American Stamp Show will not take place in 2020. After weeks of speculation, concerns about the coronavirus COVID-19 pandemic forced the show sponsors to cancel the event, which was scheduled for Aug. 20-23 in Hartford, Conn.

“Based on current information from the State of Connecticut, the show would either be canceled due to its size or require aggressive mitigation as an indoor activity,” the American Philatelic Society said in a press release issued May 22.

The APS board of directors approved the cancellation and designated Hartford as the host city for the Great American Stamp Show in 2024.

The next Great American Stamp Show is scheduled for Aug. 12-15, 2021, in the Chicago suburb of Rosemont, Ill.

This 2020 event was anticipated as the largest stamp show in the United States this year. The APS combined its long-running annual Stampshow with the American Topical Association’s National Topical Stamp Show and the American First Day Cover Society’s Americover show to create the event, which was newly named in advance of this year’s planned show.

The APS identified the health and safety of members, dealers and guests as the highest priority in canceling the show.

“Thank you to the dealers and members committed to supporting our show,” said APS executive director Scott English. “The strength of our hobby is the people in it and that’s not worth risking. Though the pandemic is changing our community, it will never weaken it.”

ATA president Dawn Hamman said: “Although we will miss seeing our stamp collecting friends, we know this is the best thing to do. There will be shows again in the future.”

AFDCS president Lloyd de Vries added, “Some things are more important than philately, such as our community’s health and safety.”

For the APS, the cancellation of its annual convention was only the second in its 134-year history. The convention did not take place in 1943 during the height of World War II.

“The APS, ATA, and AFDCS recognizes that dealers, societies and clubs, and many individuals have already made plans and reservations in Hartford for August,” the APS said in its statement.

“Guests who have made hotel room reservations within the reserved block in the Marriott and Hilton hotels will receive automatic cancellation notifications by email or may reach out to the hotels personally. Dealer and society booth deposits and exhibitor entry fees may be applied to the Chicago 2021 show or will be refunded on request. Any questions may be directed to [APS representatives] Ken Martin or Morgan Stinson.”

The APS reports that its staff is exploring the possibility of conducting a virtual show during the original 2020 dates with the support of the ATA and the AFDCS, adding that it will provide updates on progress as planning continues.