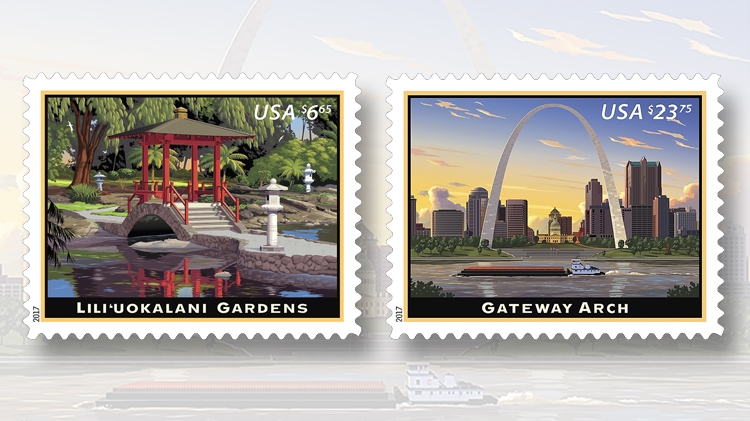 The cost of collecting press sheets declined substantially in 2017 because press sheets without die cuts were eliminated entirely, and because no press sheets of any kind were issued for the two expedited mail stamps: the $6.65 Liliuokalani Gardens and th

The annual cost to collect one mint example of each new United States stamp and postal stationery item remained fairly steady in 2017.

One each of every 2017 major variety as listed in the Scott Specialized Catalogue of United States Stamps and Covers cost $95.88.

Linn’s editors note two situations that could affect the 2017 figures for some collectors. These numbers include the Northern Cardinal forever stamped envelope (Scott U694), which the U.S. Postal Service identifies as being issued Nov. 3, 2016, and the totals include two stamps only for the History of Hockey set issued Oct. 20 (Scott 5252-5253).

The Scott editors assigned major numbers only to the two History of Hockey forever stamps issued together in a pane of 20. The nearly identical stamps in the souvenir sheet of two issued at the same time are noted in the catalog with minor-letter designations (Scott 5252a and 5253a) and a description that states that the stamps from the souvenir sheet have a glossier surface finish than those from the pane of 20.

Counting the Northern Cardinal stamped envelope (which was not formally announced until several weeks into 2017) and not counting the stamps from the History of Hockey souvenir sheet, the U.S. Postal Service issued 126 different major varieties in 2017.

While Linn’s cost calculation figures in the price for one each of the stamps issued, collectors face a challenge trying to obtain their stamps from the U.S. Postal Service that way.

Collectors often must buy a full coil roll or a full double-sided pane of 20 to obtain a single stamp or small set, for example, if buying from a local post office or from the USPS mail-order catalog, USA Philatelic.

To purchase stamps in the smallest format offered in 2017, collectors had to pay an estimated $399.11. That’s an improvement over last year’s total of $468.80, but still more than four times the face value of the single stamps needed to fill the album pages.

These calculations for full-format purchases look at each issue and presume that a collector can obtain single stamps from commemorative panes that the Postal Service authorizes for single-stamp sales.

Consider as an example, however, that most collectors visiting a post office or ordering from USPS Stamp Fulfillment Services cannot buy singles of Flag definitive stamps issued in either panes or coils. To obtain one each of the five varieties of the Flag forever stamp issued Jan. 27, 2017 (Scott 5158-5162), a collector would have to buy one pane of 10, one pane of 20, two coil rolls of 100, and an ATM pane of 18, paying $121.52 to add five stamps valued at $2.45.

The Father Ted Hesburgh coil of 50 stamps, issued with limited distribution, also required a full roll purchase, at a cost of $24.50.

Some collectors will be able to recoup some of the expense by trading with other collectors or using stamps for postage, but that’s not always possible.

The two tables (on this page and the next page) are organized into five categories identifying commemoratives, definitives (regular-issue stamps), special stamps (such as Christmas and other holiday stamps), high-denomination stamps (airmail, Priority Mail and Express Mail rate stamps, and dollar denominations), and envelopes and postal cards (postal stationery).

While the Gateway Arch stamp set a new record for the highest denomination regular-issue stamp in U.S. history, that record was broken 364 days later when the $24.70 Sleeping Bear Dunes stamp for the same mail service was issued this year on Jan. 21.

A $6.65 Liliuokalani Gardens stamped envelope, fulfilling the flat rate for Priority Mail, was also issued in 2017, adding to the overall cost of collecting stamps and postal stationery. The Postal Service sold these envelopes in packs of five at $33.25.

All of the dollar values in the past year’s totals reflect the cost of the stamp on the date it was issued. Postage rates for domestic letter mail increased from 47¢ to 49¢ on Jan. 22, 2017.

Stamp press sheets are sold through USPS Stamp Fulfillment Services and consist of multiple stamp panes that have not been separated from one another. Press sheets with die cuts continue to be issued for all commemorative stamps and most definitives.

Recent changes in the press sheet program, however, contributed to a substantial drop in the cost of collecting press sheets in 2017.

Early in 2016, the Postal Service discontinued issuing imperforate press sheets (more precisely, press sheets without die cuts) with no explanation other than a statement that stamps and philatelic products were being re-evaluated.

The Postal Service also chose not to issue press sheets for its two highest-priced stamps in 2017, the $6.65 Liliuokalani Gardens and the $23.75 Gateway Arch.

A collector who bought every press sheet produced in 2017 at its designated retail price when issued spent $1,509.95 for 22 press sheets.

The press sheet program continues in 2018, with all press sheets offered only with die cuts to date.