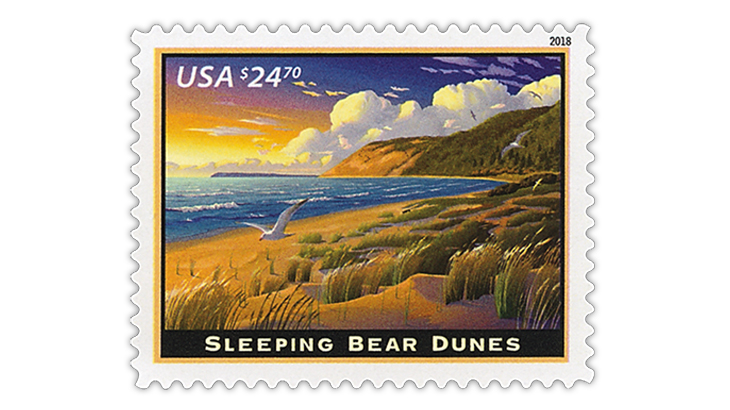 Collectors trying to obtain one each of every United States stamp in 2018 had to contend with the high price of the $24.70 Sleeping Bear Dunes stamp for Priority Express Mail.

The cost to collect one each of every United States stamp and postal stationery item issued in the past year came in at just under $100 in 2018, the third consecutive year that the total has remained at roughly the same amount.

With many variables affecting the annual cost, it’s surprising the total has remained within a range of less than $4 over the past three years.

The per-year average since Linn’s Stamp News began tabulating the annual cost to collect U.S. stamps in 1991 is $86.75.

The totals in the tables (shown in Linn's print/digital edition) listing the past years’ results include all U.S. single stamps assigned a major number (or issued as part of a major number set) in the Scott Specialized Catalogue of United States Stamps and Covers.

Only one postal stationery item, the $6.70 Byodo-In Temple stamped Priority Mail envelope, was issued in 2018.

Collectors recognize that U.S. post offices and the Postal Service’s Stamp Fulfillment Services retail division often cannot or will not sell single stamps of certain new issues, so the cost to obtain those single stamps can be multiplied by the various formats in which those stamps are issued.

For example, it is possible to purchase one $1.15 Poinsettia global forever stamp at the post office, but to obtain a single nondenominated Peace Rose forever stamp, which initially was issued at a price of 50¢, the Postal Service required the purchase of a full double-sided pane of 20 stamps, at a cost to the collector of $10.

In many instances, collectors are required to purchase as many as 100 coil stamps from Stamp Fulfillment Services to obtain a single stamp.

So while the net cost to collect to obtain one each of every stamp issued in 2018 was $95.75, the cost to purchase those stamps in the smallest format offered in 2018 was much higher, at $331.92. Collectors often try to mitigate that inflated cost by trading with other collectors who also need single stamps or certain configurations of multiples. Remainder stamps from larger formats can be used for postage as well.

While the cost to obtain single stamps dropped only slightly over each of the past two years, the actual number of stamps issued decreased a little more significantly.

In 2018, the Postal Service issued 105 different stamps. Seventy of those stamps, exactly two-thirds, were commemoratives.

The 27-year average for the number of stamps issued annually is 166.2.

The cost-to-collect figure remained fairly stable despite the decrease in the number of stamps issued, in part because of an increase of stamps with denominations of $1 or greater.

Two stamps issued in January 2018 boosted the overall annual cost, as they have almost annually since 2008.

The Postal Service also issued a $6.70 Byodo-In Temple stamped envelope. For collectors who include postal stationery, these three items (the two high-value stamps and the stamped envelope) resulted in a cost of $38.10.

At the time of its issue, the $24.70 stamp was the highest priced regular postage stamp ever issued by the United States. It was surpassed this year on Jan. 27 when the $25.50 Bethesda Fountain stamp (Scott 5348) was issued to fulfill the newly increased Priority Express Mail postage rate.

For the second consecutive year, the Postal Service in 2018 did not issue press sheets for either the Priority Mail or the Priority Express Mail stamps.

However, 23 press sheets were issued in various sizes for selected commemorative, definitive and special stamps, adding up to a separate cost of $1,449.68 for the collector who chooses to add one of each press sheet to his collection.

The Postal Service appears to have ended its series of press sheets issued without die cuts, as all 23 issues in 2018 were offered only in a single variety: with the die cuts that normally separate individual stamps on the pane.

In 2016, when press sheets were being offered for the Priority Mail and Priority Express Mail stamps, the cost for 39 press sheets, including some issued without die cuts, was $4,556.60.