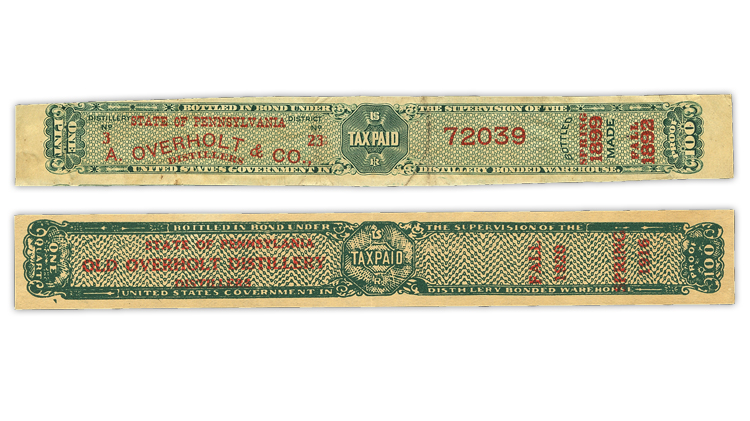 At the top is a genuine U.S. Internal Revenue stamp identifying the contents of a bottle of whiskey as being bottled in bond. Below it is a counterfeit of the basic stamp with information in red added, all with the objective of selling inferior goods.

There have been instances where the United States Postal Inspection Service has broken cases before the counterfeiters had a change to distribute their products for use. No examples are known outside of government files.

Among these are counterfeits of the 1954 10¢ Independence Hall of the Liberty issue, the 1968 50¢ Lucy Stone Prominent Americans definitive, and the 1995 46¢ Ruth Benedict Great Americans definitive. These and several more are listed in the Postal Counterfeits section of the Scott Specialized Catalogue of United States Stamps and Covers.

A counterfeit has recently come to hand that would not be eligible for listing because it is one of the types of Internal Revenue stamps that are not included in the Scott U.S. Specialized catalog.

These revenue stamps, sometimes called strips, were affixed over the top of bottles of liquor, in this case, whiskey.

This counterfeit would allow the producers to avoid not just the tax but also the cost of quality control under government supervision.

This counterfeit may be the only example known.

How he got it I don’t know, but attorney Philip Garrett of Wilmington, Del., gifted it to philatelic legend Philip H. Ward Jr. (1890-1963), a well-known dealer and columnist for Mekeel’s Weekly.

The letter to Ward from Garrett says, in part, “The bootleggers in this section have recently been disposing of large quantities of alcohol, water, caramel and glycerine under the name of whiskey. In a recent raid, about 20 gallons of raw alcohol was captured, together with a lot of counterfeit labels of Overholt Whiskey, and five or six hundred counterfeit tax paid bottled-in-bond stamps. … ”

Tracking the ownership after Ward’s passing, it appears that brothers Raymond and Roger Weill, high-end dealers in New Orleans, were the next owners.

From them it went to collector Paul Freeland, then to student of philatelic literature and seller of same Leonard Hartmann, and from him to me.

Included with the counterfeit as it went from hand to hand was a clipping from the Philadelphia Evening News of Feb. 9, 1921, with the headline “Confiscate 100,000 Fake Rum Labels — Arrest Five” and the subhead, “U.S. Agents Raid Printing Houses and Discover Counterfeit Stamps.”

“The prisoners are said to be members of a clique which has been conducting a profitable trade in moonshine whisky labeled and stamped as bonded goods. … ”

As can be seen, the counterfeit is a reasonable facsimile though somewhat darker than the genuine, and it was printed by offset rather than intaglio, which allows for better definition of the design elements.

The dark color also means that the red text identifying the precise product does not stand out well.

If you can report other examples of this counterfeit or anything similar, I would be interested in hearing from you. I can be reached by email at jmhstamp@verizon.net or by mail at Box 1125, Falls Church, VA 22041-0125.