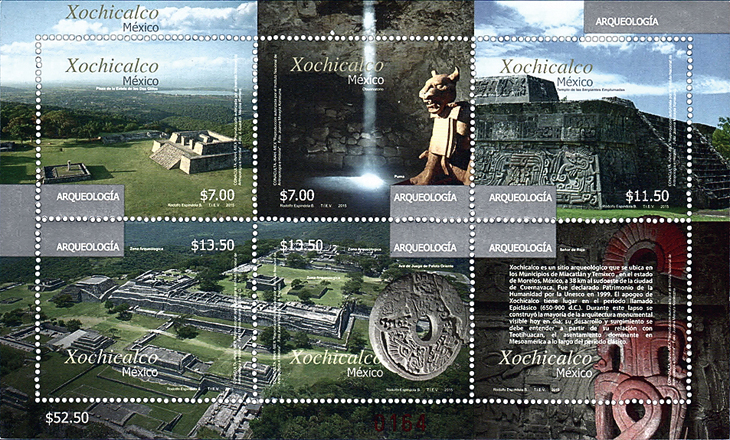 Ruins of Xochicalco in central Mexico are featured in the most recent pane of five stamps and a label in Mexico’s Archaeology series. 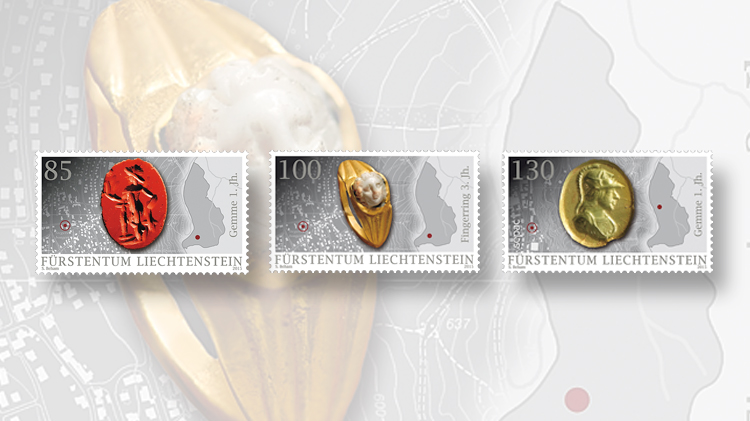 The second set of stamps in the Archaeological Finds in Liechtenstein series pictures pieces of jewelry from the period when Liechtenstein was part of the ancient Roman province of Raetia. The issue date is Nov. 16. 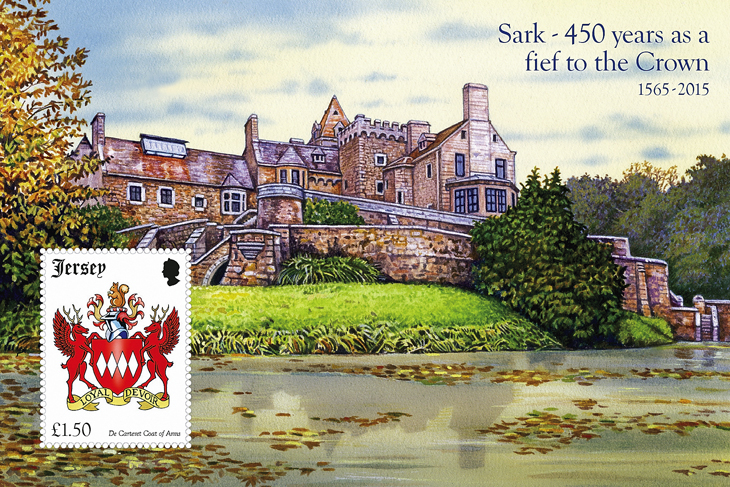 A Jersey souvenir sheet issued Aug. 6 celebrates the 450th anniversary of the Channel Island of Sark becoming a fief to the crown. 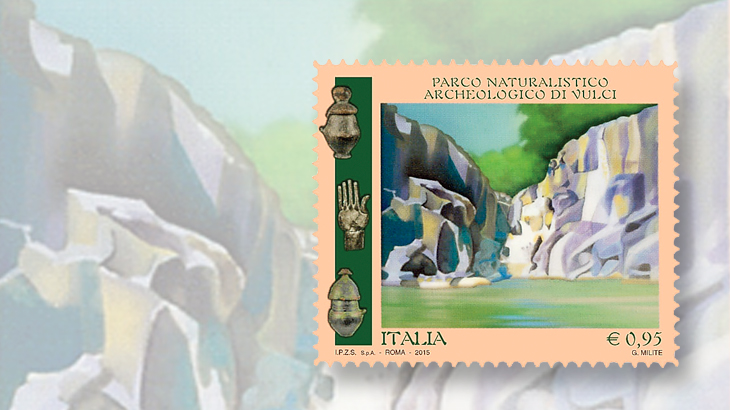 Artifacts found at Vulci Natural and Archaeological Park, including a silver hand, are included in the design of this Italy stamp issued Aug. 12. 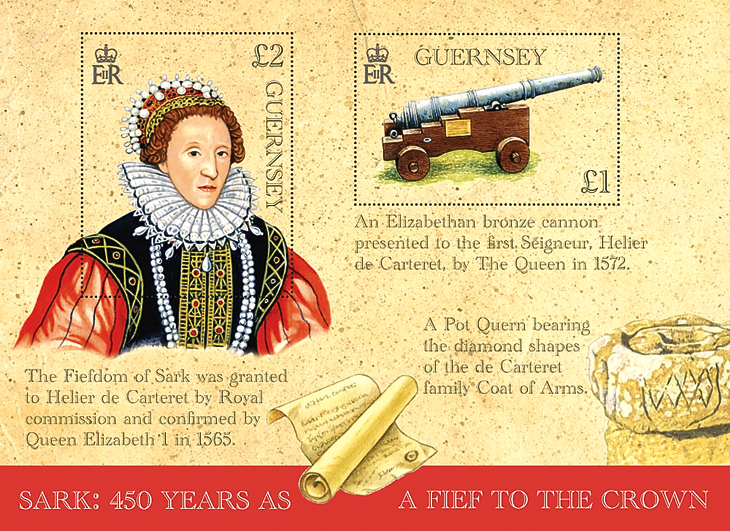 Guernsey also commemorated the 450th anniversary of Sark becoming a fief to the crown. A souvenir sheet was issued (shown), as well as a set of five stamps. 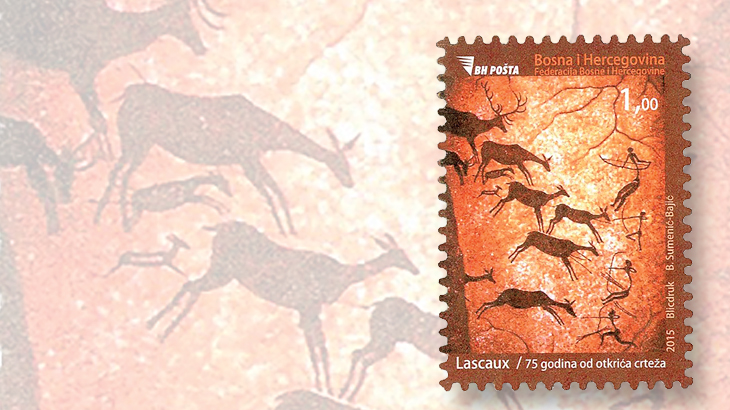 Bosnia and Herzegovina (Muslim government) commemorated the 75th anniversary of the discovery of Lascaux Cave in France on this 1-mark stamp issued Sept. 10.
Previous
Next

Jewelry is featured on the second set of stamps in the Archaeological Finds in Liechtenstein series.

The first set, issued by Liechtenstein June 2, 2014, pictures ancient coins (Scott 1606-1608). In addition to showing a coin, each design includes stylized maps indicating where the item was discovered.

This year’s Jewelry set, to be issued Nov. 16, follows the same design pattern. The pieces shown date from the first through third centuries when Liechtenstein was part of Raetia, a province of the Roman Empire. They were unearthed during archaeological excavations in the late 20th century.

The low denomination of the set, 85 rappen, depicts an oval piece of red jasper from a finger ring. The image  impressed into the jasper is believed to be that of the Roman god Apollo.

A gold cameo ring with the head of Medusa is pictured on the 1-franc stamp.

The 1.30fr stamp shows a cameo made of green glass with the bust of the goddess Minerva wearing a helmet. This stamp also includes the Sepac emblem, indicating that it is part of the Small European Postal Administration Cooperations’ multination series on the theme of culture.

The most recent stamps in that series picture Xochicalco, an ancient, fortified hilltop city believed to have been inhabited from 650 to 900 and then suddenly abandoned.

In the language of the Nahuatl people, also known as Aztecs, Xochicalco means “the place of the house of flowers.” It was inscribed on UNESCO’s World Heritage list in 1999.

Mexico issued the pane of five stamps and a label on Oct. 1. The stamps, designed by Rodolfo Espindola Betancourt, show photographs taken of the site.

Starting in the upper left, a 7-peso stamp pictures the Plaza of the Stele of the Two Glyphs. Shown next on another 7p stamp is a cave that  was used as a solar observatory. The cave was modified to allow a beam of sunlight to shine in. The beam is only visible from April 30 to Aug. 15.

Xochicalco’s Pyramid of the Feathered Serpent is depicted on the 11.50p stamp on right in the top row, and an aerial view of the complex is shown across the two 13.50p stamps in the bottom row.

A stamp issued Aug. 12 in Italy’s Natural Heritage and Landscape series shows a scene and artifacts from Vulci Natural and Archaeological Park.

The park’s website describes it as presenting “a complete panorama of Etruscan and Roman city, necropolis, uncontaminated nature and countryside. … ”

Although official excavations in the area began in the late 18th century, one of the artifacts shown on the stamp — the hand — wasn’t uncovered until 2012.

The hand is made of silver with gold on the fingers and fingernails, according to an article titled “The Tomb of the Silver Hands” in the July-August 2014 issue of the Archaeological Institute of America’s Archaeology Magazine.

The article also said that the hand was from a funerary dummy, probably representing a high-ranking Etruscan woman.

The Vulci stamp is denominated €0.95, as are the other three stamps in the set, which show Asinara National Park, Alpine Botanical Garden of Campo Imperatore, and Trieste Botanical Garden, respectively.

Giustina Milite designed the stamps. The Italian State Polygraphic Institute printed them by gravure in sheets of 28.

The stamp pictures the ruins of Segobriga’s theater and a bust found during excavations. The bust has been identified as Agrippina Major, granddaughter of Augustus Caesar, wife of Germanicus Caesar and mother of Caligula.

Earlier in the year, on April 27, Spain issued a souvenir sheet honoring the Cave of Altamira, a UNESCO World Heritage site located in northern Spain known for its prehistoric cave paintings. A cave painting of a bison is reproduced on the round €3 stamp in the souvenir sheet.

The Museum of Altamira website says: “The Bison, horses, deer, hands, and mysterious signs were painted or engraved over the 9,000 years during which the cave of Altamira was inhabited (22,000 and 13,000 before the present). These representations extend for a length of more than 270 metres [885 feet] throughout the cave although the best known are the famous polychrome paintings. …”

A cave painting also is pictured on a 1-mark self-adhesive stamp issued Sept. 10 by Bosnia and Herzegovina (Muslim government).

The stamp commemorates the 75th anniversary of the discovery of Lascaux Cave in southwestern France Sept. 12, 1940, by Marcel Ravidat, 18 at the time, his dog Robot and friends.

A page on the website of the International Committee for the Preservation of Lascaux describes the discovery, saying that it was Robot who found the hole that led to the cave.

The site also says: “Marsal remembers this first encounter describing what they saw as a ‘cavalcade of animals larger than life painted on the walls and ceiling of the cave; each animal seemed to be moving.’ The ceiling was pure white, covered with calcite. And the paintings were brilliantly multicolored in reds, blacks, browns and ochres. The boys were standing in The Hall of the Bulls. Mesmerized by their findings, the boys ventured to the end of the cave. By then, the light from the oil lantern was fading and they realized they needed to return to the surface.”

Jersey and Guernsey both commemorated the 450th anniversary of Sark becoming a fief to the crown on stamps issued this summer.

On the Isle of Sark tourism website,  Sark describes itself as the “crown jewel of the Channel Islands, nestled in between Guernsey and Jersey, 80 miles south of England.”

On Aug. 6, Jersey issued a souvenir sheet with a single £1.50 stamp showing the De Carteret coat of arms. The family’s ancestral manor in St. Ouen, Jersey, is pictured in the selvage.

The new-issue announcement from Jersey said: “On 6 August 1565, Helier De Carteret, the Seigneur of the parish of St. Ouen in Jersey, was granted the Isle of Sark by Queen Elizabeth I in Letters Patent. Sark was thereby made an inheritable fief, which Helier held from the Crown of England on certain conditions: he had to maintain at least forty men to defend the Island from pirates, do homage to the sovereign and pay an annual 1/20th part of a knight’s fee.”

Guernsey illustrates the history of the island of Sark on seven stamps designed by Nick Shewring. The stamps were issued July 22.

Two of the stamps are in a souvenir sheet, one showing Queen Elizabeth I (£2) and the other picturing a bronze cannon presented to the first seigneur (£1).

The other five stamps were produced in panes of 10 with additional illustrations in the selvage.

The 42-penny stamp features St. Magloire, who landed on Sark in 565 along  with 62 monks to establish a monastery. The design shows Magloire subduing a dragon.