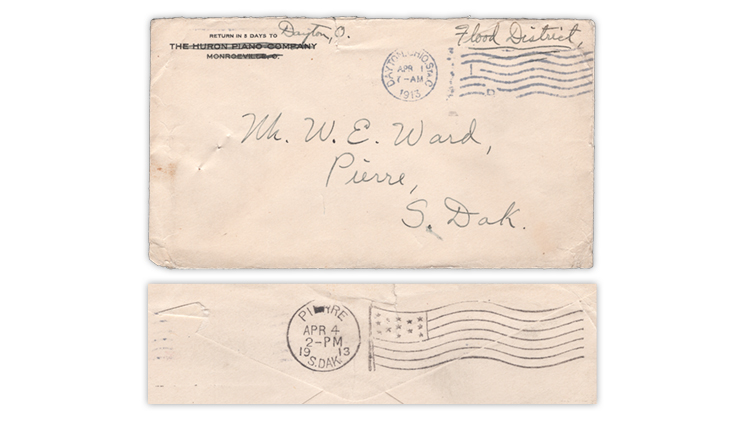 This cover marked “Flood District” was sent April 1, 1913, from Dayton, Ohio, just days after a flood had devastated that city with the downtown under 20 feet of water at the peak. The cover was sent without payment of postage because of the disruption in

Disaster mail is a fascinating collecting area, principally because of the human stories behind it. How did people cope? A recent find is the cover shown here. It is marked “Flood District” in the place where a stamp should be.

The cover was postmarked April 1 in Dayton, Ohio, and according to the backstamp received in Pierre, S.D., on April 4.

The natural disaster often called the Great Dayton Flood of 1913 was caused by a series of winter rainstorms that drenched the Midwest from March 21-26. Within the three heaviest days of rain, 8 to 11 inches of rain fell throughout the Great Miami River watershed on already saturated soil, resulting in more than 90 percent runoff.

Existing levees failed, and downtown Dayton was flooded up to 20 feet deep. Postal services were interrupted for weeks for the residents of Dayton and the surrounding area. Flooded post offices were not open. Some mail that was delivered was delivered by boat.

Outgoing mail that could be accepted in the region was often permitted to be sent without postage as there were no places open to buy stamps.