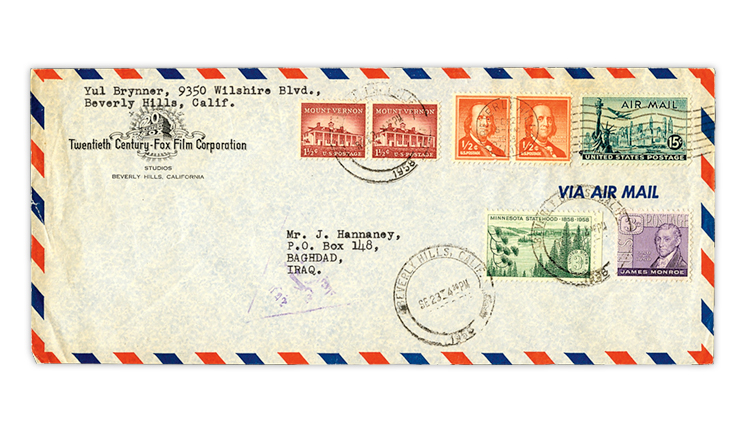 A Sept. 23, 1958, cover sent by actor Yul Brynner from Twentieth Century-Fox Film Corporation in Los Angeles to a stamp collector in Baghdad, Iraq.

The Jan. 14 issue of Linn’s Stamp News just landed on the presses and goes in the mail to subscribers Monday, Dec. 31. And if you subscribe to Linn’s digital edition, you’re at the head of the line with early access Saturday, Dec. 29. Here are three stories you'll want to check out.

In his column The Odd Lot, Wayne L. Youngblood researches the history behind a cover mailed Dec. 14, 1936, that was recovered from an airplane crash near Salt Lake City, Utah.

In each weekly issue of Linn’s, either E. Rawolik VI or E. Rawolik VII will analyze the content of a stamp mixture offered to collectors. E. Rawolik, of course, is a pseudonym that is also the word “kiloware” (a stamp mixture) spelled backward. This week, E. Rawolik VI reviews a mixture from Yersel of Massachusetts. He began his analysis: "Yersel offered dollar-value stamps at 10 percent of catalog value, and I liked that. The order arrived nine days later. Included were 91 stamps. I selected a one-half sample of 46 and started the review.” Read the full review in this issue.