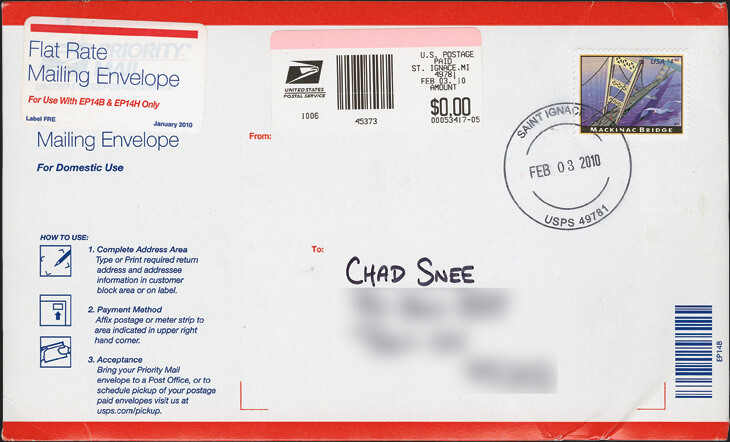 Stamp collectors love stamps. One way we show our devotion, of course, is by using stamps on mail.

During the course of my almost 20 years at Linn’s Stamp News, I’ve received hundreds of letters and parcels franked with stamps.

Of these, the ones I cherish the most are those received from my many philatelic colleagues and friends.

Herewith are four that I dug out of my bulging files for your viewing enjoyment.

In this case, the Feb. 3, 2010, postmark date is significant — that’s the stamp’s official first day of issue.

Does that make this an official first-day cover? Not so fast.

Notice that the cover was postmarked in St. Ignace, Mich. The official first-day city, however, was Mackinaw, Mich.

To answer this question, I turned to Jay Bigalke’s March 1, 2010, report in Linn’s about the $4.90 Mackinac Bridge first-day ceremony, which he attended.

Space constraints and the desire to hold the ceremony indoors prompted officials to conduct the event on the St. Ignace side of the Mackinac Bridge, Jay wrote.

Several days before the ceremony, I asked Jay to send me unofficial $4.90 Mackinac Bridge first-day covers postmarked in Mackinaw City and St. Ignace, which are on opposite ends of the bridge.

Unfortunately, the Mackinaw City cover suffered a nasty scuff that damaged the stamp during transit. The St. Ignace cover, as you can see, looks fantastic.

Of course, I reimbursed Jay for the cost of the stamps, and I am grateful he had time to service the covers and mail them to me.

To read the rest of Charles Snee's Dollar-Sign Stamps column and more in the June 5 issue, subscribe to Linn's Stamp News!