Get creative and caption this 1989 $2.40 Raising of the Flag on the Lunar Surface stamp 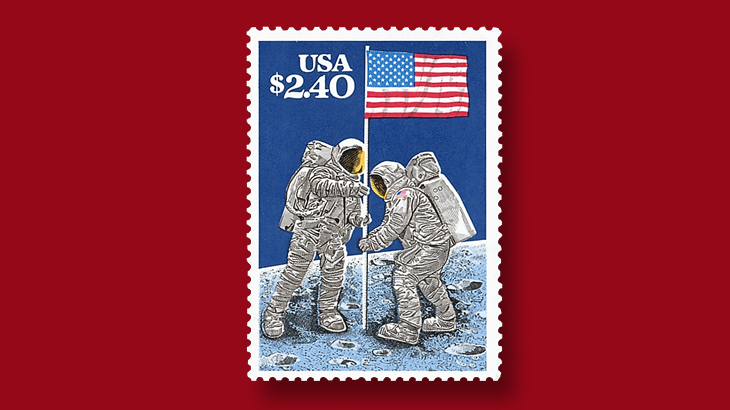 The cartoon caption contest stamp for May is the 1989 $2.40 Priority Mail stamp that commemorates the 20th anniversary of the first manned exploration of the moon’s surface. What do you think the astronauts on the stamp might be thinking or saying? The ru

Next year will be the 50th anniversary of the first manned moon landing, which occurred on July 20, 1969. In conjunction with the upcoming anniversary, the 1989 $2.40 Raising of the Flag on the Lunar Surface stamp (Scott 2419) is the cartoon contest stamp for May.

This stamp celebrates the 20th anniversary of the Apollo 11 moon mission that took American astronauts to the moon and returned them safely to Earth.

The astronauts shown on the stamp are Neil Armstrong and Edwin “Buzz” Aldrin Jr. Circling the Moon in the Apollo 11 command module was Michael Collins.

All three were living at the time the stamp was issued, but the Postal Service justified including living persons in the design because the stamp did not honor them, but rather the pioneering event.

In the space race, the Soviet Union was the first to place a man-made object on the moon, when on Sept. 13, 1959, the spacecraft Luna 2 made a hard landing on the moon’s surface.

The United States was the first (and so far the only) country to put astronauts on the moon with six manned missions between July 1969 and December 1972.

Put yourself in the spacesuit of one of the astronauts on the stamp, and tell me what you believe he might have been thinking or saying as they planted the flag on the moon.

Possible subjects include the space race between the United States and the Soviet Union, philatelic commemorations, politics, or anything else that powers your spacecraft.

To be considered for the prizes, entries must reach me no later than May 25.