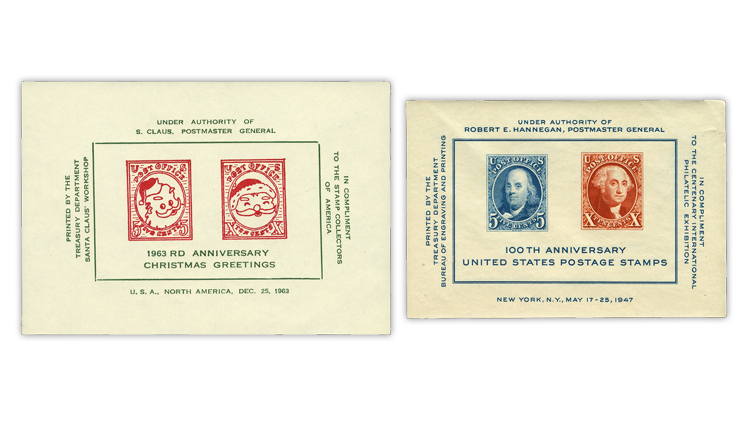 This 1963 Santa Claus spoof souvenir sheet raises a number of questions, including who was behind the creation of the sheet. It was modeled on the 1947 Cipex (Centenary International Philatelic Exhibition) souvenir sheet that honors the 100th anniversary

A 1963 souvenir sheet, probably issued by a stamp club, attempts to link Santa Claus with the first postage stamps of the United States.

The Santa Claus sheet is shown together with the 1947 Cipex (Centenary International Philatelic Exhibition) souvenir sheet on which it is modeled.

The Cipex sheet shows the 1847 5¢ Benjamin Franklin (Scott 1) and 10¢ George Washington (2) stamps. The privately made Christmas sheet roughly approximates the designs of the 1847 stamps with images of Santa replacing those of the two founding fathers.

The text on the left says it was printed by the Treasury Department at Santa Claus’ workshop.

Inscribed on the right is “In Compliment to the Stamp Collectors of America.”

However, nothing is said about who is actually behind the creation.

If you can provide further information as to who designed and produced this sheet, what organization was behind it, and how many were produced and how they were distributed, I would appreciate hearing from you.