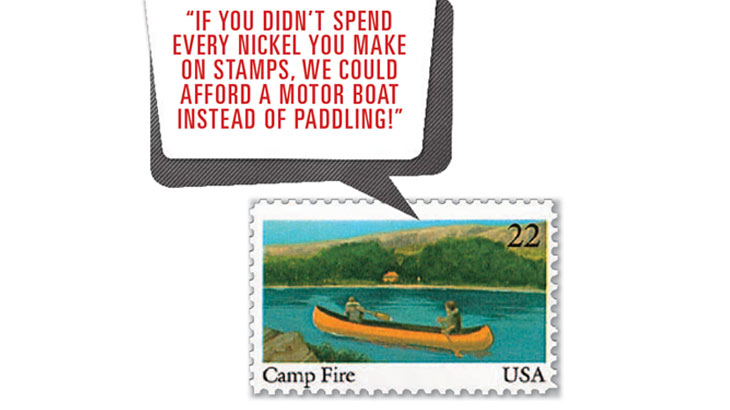 “Up the creek (without a paddle)” was the predominant theme in the April cartoon caption contest featuring the 1985 22¢ Camp Fire stamp. Readers had several approaches to the theme.

For example, Kay Don Kahler of Matthews, N.C., took on the U.S. Postal Service with “More postage increases? We’re really up the creek!”

A nonphilatelic take was sent in by Robert Rukrigl of Severna Park, Md.: “We can’t be up there — We still have paddles.”

Another group of entries had the kids in the canoe searching for places and events. Nicholas Carroza of Levittown, Pa., represents this group with “These First Day ceremonies are getting tougher and tougher to find!”

A third group of entries had the rowers looking for an answer to an ongoing philatelic problem. David Schwartz of Commack, N.Y., takes this on with “No luck. Even after sitting in the river for a week, those darn self-adhesives stamps are still stuck to the envelope.”

The philatelic line winner in this month’s contest used a thought that might resonate with some close relatives of stamp collectors. It was sent in by Bob Boynton of Carmel, Ind.

On the nonphilatelic side, Steve White of Savannah, Ga., takes the laurels with “The last time I was here I got hit in the head with a paddle. It was oaribble!”

“No! No! Samantha. Wait ’til we get on shore to start the camp fire,” by Reid Hinson, of Kill Devil Hills, N.C.

“This is one way to escape helicopter parents!” from Elliott Idoff of Fort Lee, N.J.

“THREE times we’ve passed the boys’ camp and Jimmy hasn’t even waved to me. He and I are through!” by David Vikan of Dickinson, N.D.

“Matches? I thought you brought the matches,” from Ross Collins of Fargo N.D.

“This is the last time I buy a ‘luxury river cruise’ on eBay!” sent by Steve Kotler of San Francisco, Calif.

The next contest will be announced in the June 10 issue of Linn’s.