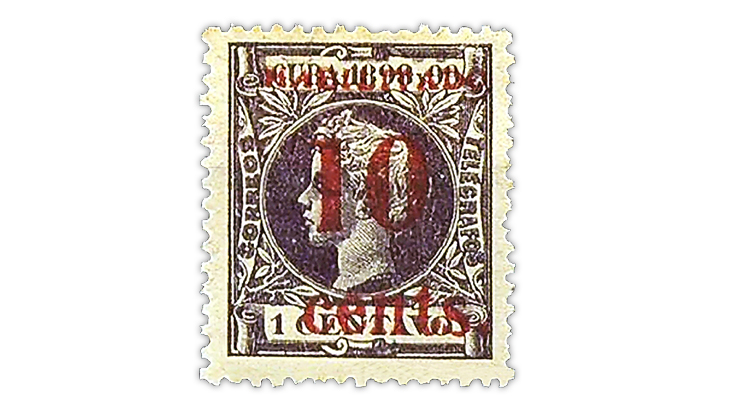 All of the Cuban Puerto Principe overprints of 1898 are uncommon to scarce, and they would be a great buy at Scott Specialized Catalogue of United States Stamps and Covers values. Counterfeits are ubiquitous.

As a result of the Spanish-American War, Cuba temporarily came under United States administration from Dec. 10, 1898, to May 20, 1902. The first stamps listed in the Cuba section of the Scott Specialized Catalogue of United States Stamps and Covers are called the Puerto Principe issue.

“The surcharging was done to horizontal strips of five stamps, so vertical pairs and blocks do not exist. Five types are found in each setting, and five printings were made. Counterfeits are plentiful.”

Because of the poor centering of the Cuban stamps, the Puerto Principe overprints (Scott 176-220) are valued in the grade of fine in the Scott U.S. Specialized catalog.

If you can find one of these less expensive stamps that is in fine grade or better, sound and competently expertized, it is well worth full Scott catalog value.

Counterfeits are ubiquitous. Examples that are tied to piece or in strips are no guarantee of authenticity. There is information online to help you identify genuine overprints, but it is not an easy task.