Give this Curious George stamp a caption 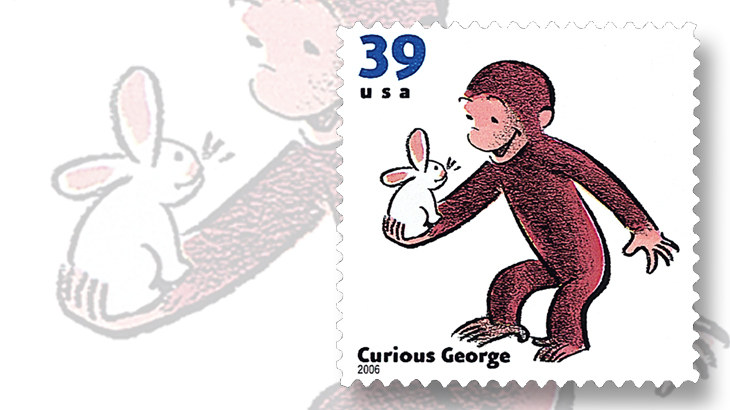 The cartoon caption contest stamp for October is the 2006 39¢ stamp featuring Curious George, fabled star of books, television, film and even a video game.

Curious George was a favorite of my four children. In fact, he was an inspiration to my middle son, who saw George’s curiosity as a match for his own. In an act of divine retribution, his oldest daughter has the same spirit of adventure.

Curious George made his debut in 1939 in France in Rafi et les 9 singes (called Cecily G. and the Nine Monkeys in the United States).

Starting in 1941, all the Curious George books were published by Houghton Mifflin in the United States, and he has been delighting generation after generation ever since.

Curious George is pictured on a 39¢ stamp (Scott 3992) issued Jan. 10, 2006, as part of a set of eight picturing favorite animals from children’s books, a joint issue with Great Britain. There were some common designs in this joint issue but also some subjects unique to each country. George was not in the British set.

We will use the U.S. Curious George stamp for the October cartoon caption contest.

Channel your grade-school self and tell me what you might be thinking or saying to the rabbit, or to the Man in the Yellow Hat.

The subject matter can be anything you like, from philately to politics to an adventure that might be tempting George.

To be considered for the prizes, entries must reach me no later than Oct. 28.