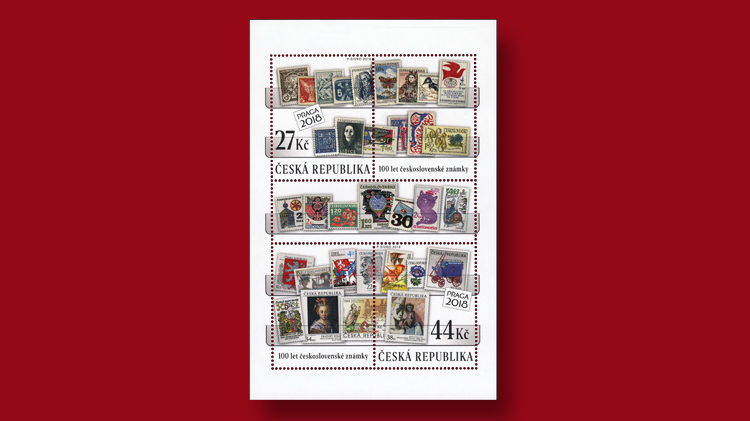 A total of 33 stamps are shown on a souvenir sheet honoring 100 years of Czechoslovak stamps. This issue from the Czech Republic also commemorates the Praga 2018 stamp exhibition.

The Czech Republic expanded this concept by issuing a souvenir sheet June 20 showing images of 33 different stamps to mark the 100th anniversary of the first Czechoslovak stamps.

Images of eight Czechoslovak stamps are arranged in two rows on the 27kc stamp, starting with a 1919 25-haler semipostal showing a Bohemian lion breaking its chains (Scott B125).

The 44kc stamp and the label beside it picture stamps of the Czech Republic. The Czech Republic’s first stamp, the 3kc National Arms issued Jan. 20, 1993 (Scott 2877), is reproduced on the label.

In addition, parts of two stamps are included on both the 44kc stamp and the label: a 1998 stamp depicting Charles IV (3040b); and the stamp from the 2014 souvenir sheet honoring the 670th anniversary of St. Vitus Cathedral in Prague (3615).