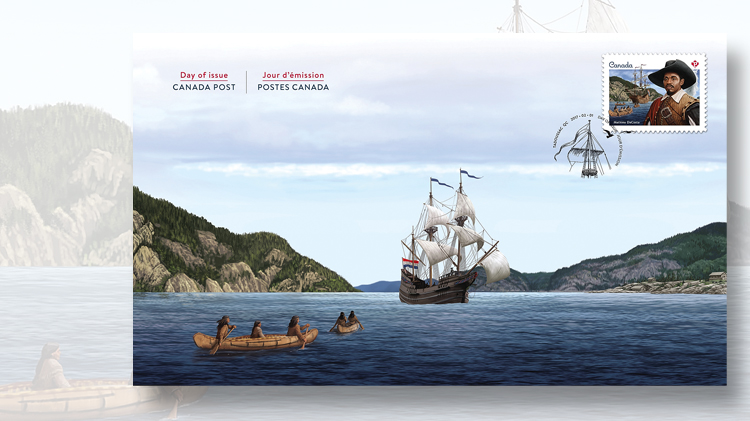 Canada Post’s first-day cover for the Mathieu Da Costa stamp offers a longer view of the image of his arrival in New France in the early 17th century than is portrayed on the stamp. 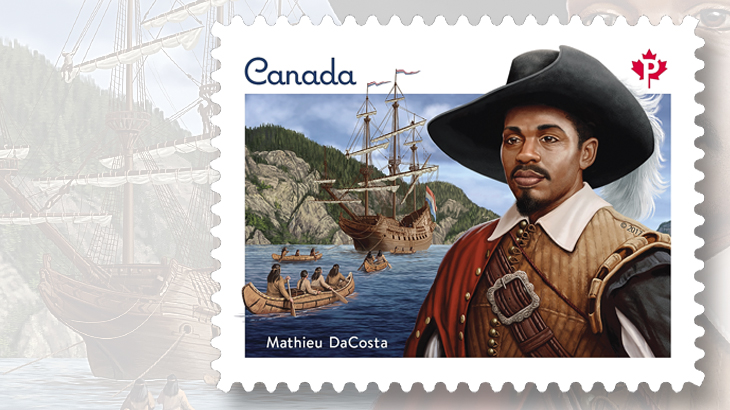 Believed to have been the first man of African heritage to have arrived in Canada, translator and explorer Mathieu Da Costa is honored on this domestic letter-rate stamp issued Feb. 1. It is the 13th Black History Month stamp issued by Canada Post since 2 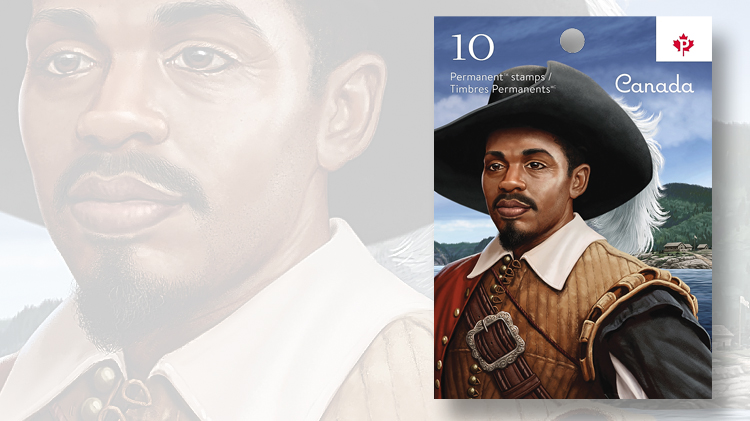 Although no portrait of Mathieu Da Costa exists, a stamp designer and two illustrators took great pains to create a depiction that would “reflect Da Costa’s time and socio-economic milieu,” according to Canada Post. The portrait is featured on the cover
Previous
Next

The latest stamp in Canada Post’s Black History Month series recalls the earliest-known Canadian of African descent, about whom so little is known that there is widespread disagreement even as to his surname.

The new nondenominated “P” permanent-rate stamp (85¢) honoring Mathieu Da Costa was issued Feb. 1. In a press release, Canada Post refers to him as a “17th century interpreter believed to be the first person of African descent to arrive in Canada whose name is known today.”

Da Costa was born in the late 16th century, perhaps in West Africa’s Benin Empire or in the Azores. A free man known for his prodigious talent as a multilingual interpreter, he was employed by French and Dutch traders and explorers, according to the Black History Canada website.

“It was not unusual for Africans to act as translators for Europeans as it had been going on for 100 years before Champlain’s time as Europeans explored their way down the African coast.

“This explains why Da Costa spoke French, Dutch, and Portuguese. But it is a mystery how Da Costa knew how to be an interpreter with the First Nations of America. He might have used ‘pidgin’ Basque (a mixture of Basque and local), commonly used for trade in the Americas. (The Basques of northern Spain were frequent visitors to the fishery along the Atlantic coast.) This dialect was understood by the Mi’kmaq and Montagnais (who lived along the north shore of the St. Lawrence River). But it is also possible that Da Costa had previously spent time in the Americas and had learned the languages of one or more of the Aboriginal peoples.”

Da Costa is believed to have come to Acadia early in the 17th century.

According to Canada Post, “His connection to Canada came in the year 1608 — the year Samuel de Champlain founded the city of Quebec — when Da Costa signed a contract to work for French fur-trader, explorer and governor of Acadia, Pierre Dugua de Mons.”

Dugua is pictured on a 49¢ Canadian stamp (Scott 2044) marking the 400th anniversary of his arrival in Acadia in 2004, part of a joint issue with France.

As with all Canadian stamps issued in 2017, the Da Costa stamp will contain references to Canada’s sesquicentennial that are visible only under ultraviolet light.

Canadian Bank Note printed the self-adhesive stamp by five-color offset lithography in booklets of 10. A total of 1.4 million booklets were printed. The stamp measures 33 millimeters by 25mm.

Also available are 10,000 official first-day covers (414034131, price $1.85) with a pictorial cancellation from Tadoussac, Quebec, at the confluence of the Saguenay and the northern shore of the St. Lawrence River, where historians believe Da Costa may once have come ashore.