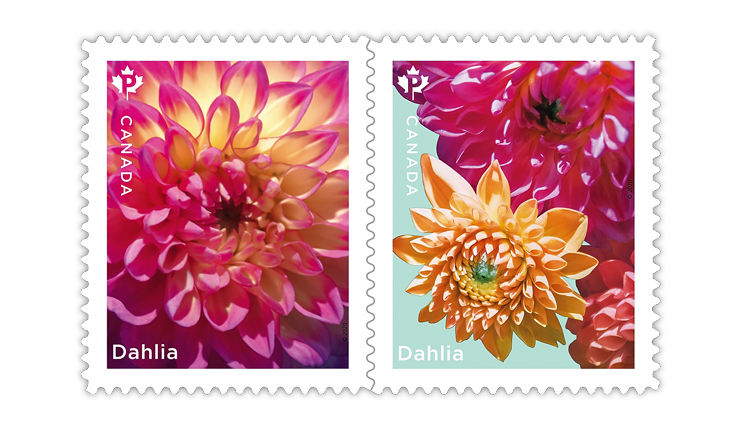 On March 2, Canada Post is issuing a se-tenant (side-by-side) pair of nondenominated permanent-rate (currently 92¢) Dahlia stamps in a booklet of 10, coil of 50 and souvenir sheet of two. The stamps in the souvenir sheet have traditional water-activated gum, and the others are self-adhesive.

Canada Post describes the stamp designs as depicting “dahlias in striking shades of fuchsia and orange.” One stamp shows a single dahlia bloom, and the other features three. Two dahlias are pictured in the selvage of the souvenir sheet.

Carolyn Cutt, president of the Hamilton and District Chrysanthemum and Dahlia Society, is quoted in the January-March issue of Canada Post’s Details magazine for collectors, “Canadian gardeners enjoy dahlias for their longblooming, show-stopping appeal, and because they provide a nectar source for pollinators until winter.”

Found in almost every color except blue, dahlias are members of the Asteraceae family.

Although grown in Canada and the United States, the dahlia is native to Mexico and Central America. In 1963, it was named as Mexico’s national flower.

The stamps also differ in size, with the booklet stamps measuring 26 millimeters by 32mm, and the coil stamps 20mm by 24mm. The souvenir sheet is 127mm by 73mm.

Canada Post serviced 7,000 first-day covers with a Bloomfield, Newfoundland, pictorial cancel showing a drawing of a dahlia bloom. Three dahlias are depicted on the cachet.