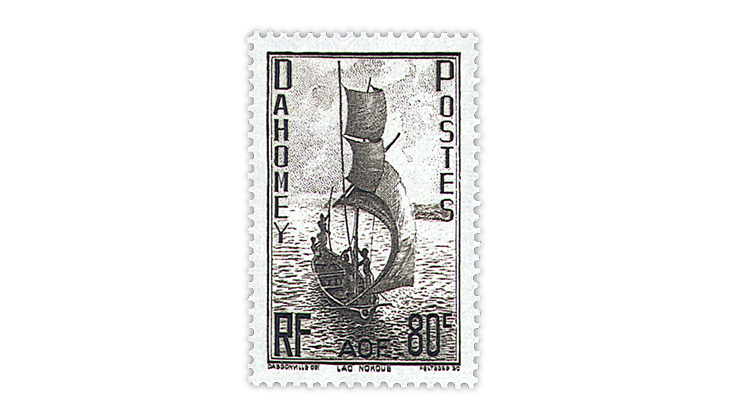 The 1941 Dahomey set of 22 Local Scenes large pictorial definitive stamps (Scott 113-134) is popular with classic and topical stamp collectors, as well as collectors of French colonies and Africa.

Dahomey, a kingdom on the west coast of Africa on the Bight of Benin, was annexed by France in 1894. It became an administrative unit of French West Africa in 1895.

The first stamps were issued for Dahomey in 1899. Stamps of French West Africa superseded Dahomey stamps in 1945. The Republic of Dahomey gained independence on Dec. 4, 1958. In 1975, the country’s name was changed to Benin.

In 1941, Dahomey issued a set of 22 large pictorial definitive stamps showing local scenes (Scott 113-134). The stamp designs depict a man poling a canoe, a pile house, a sailboat on Lake Nokoue and a Dahomey warrior.

The set is not hard to find and is a good buy in unused hinged condition in the $15-to-$20 price range. Mint never-hinged sets aren’t as easy to locate and are a good buy at around $30.