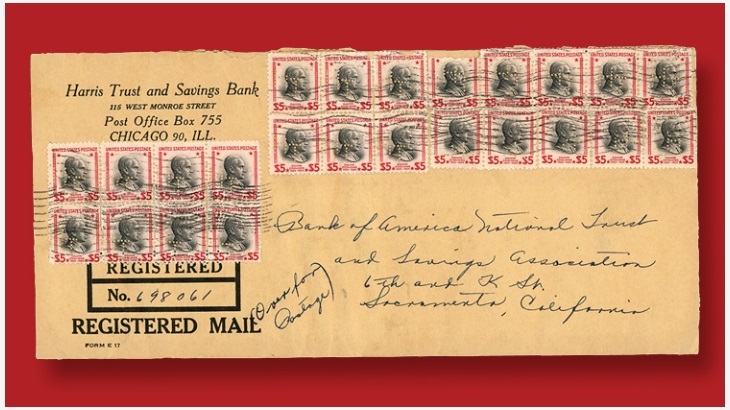 A bank envelope franked front and back with more than three dozen examples of the $5 Calvin Coolidge stamp from the 1938 Presidential series. At the Dec. 11-13 Daniel F. Kelleher sale, the registered cover sold for $13,800. 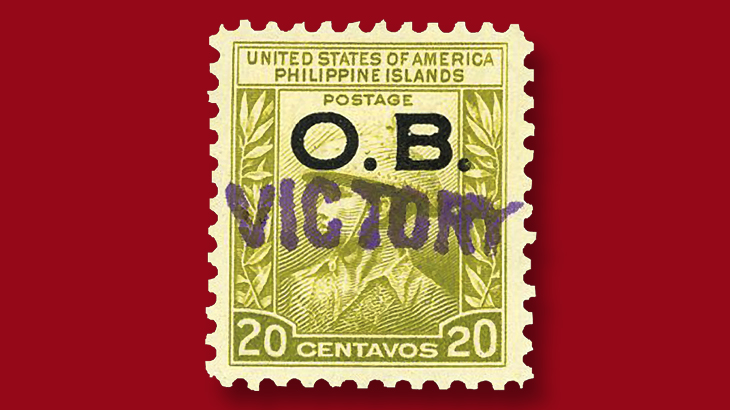 A 1944 “VICTORY” handstamp on the 20¢ Official stamp from the Philippines. Sold at the recent Kelleher Flagship sale for $13,800, its realization far exceeded the 2018 Scott catalog value. 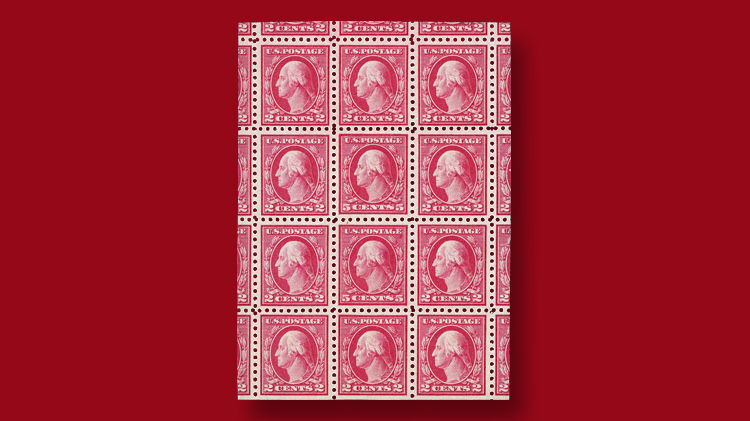 Daniel F. Kelleher Auctions sold a block of 12 containing the 1916 Washington 5¢ red error in its Dec. 11-13 Flagship sale.
Previous
Next

Each printing of the 1857 5¢ stamp resulted in a different shade of brown. Four major shades of brown were issued, with numerous minor varieties of each shade.

The rarest of these shades is the Indian red (Scott 28A), with only five stamps known with any gum. The best-known example recently sold through Kelleher for $84,000 in the firm’s Oct. 11-13 sale.

The current Dec. 11-13 sale offered an unused no-gum 5¢ Indian red stamp with a perf fault at bottom right. It sold for $14,400, including the 20 percent buyer’s premium.

The rarest of the experimental bluish paper Washington-Franklin stamps from 1909 are the 4¢ and the 8¢ issues; fewer than 100 of each are known. Kelleher auctioned a 4¢ stamp (Scott 360), unused and previously hinged with original gum, for $16,200.

In 1916, sheets of the 2¢ red Washington stamps were issued with three positions inscribed with 5¢ denominations instead of the correct 2¢.

This happened during the production process when, after the original die was engraved, it was transferred to a steel cylinder called a transfer roll. The transfer roll was then used to press the design into the printing plate. A proof made from the plate was examined and any defects noted.

Positions 74 and 84 from the upper left pane of 100 and position 18 from the lower right pane of 100 were marked on the proofs. These positions were then burnished out and re-entered using the transfer roll. Unfortunately, the 5¢ transfer roll was mistakenly used to re-enter these positions. This mistake was not caught, and the error was released to the public.

Probably the largest franking of the $5 Calvin Coolidge stamp (Scott 834) from the 1938 Presidential series — known as the Prexies — realized an impressive $13,800. The envelope is franked with 37 $5 stamps plastering both the front and back of the cover, plus an 8¢, 30¢ and $1 stamp from the same definitive series. The franking totaled $186.38 in postage to ship the registered cover from Harris Trust and Savings Bank in Chicago to Bank of America in Sacramento, Calif., in 1946.

In 1944, the Philippines handstamped the overprint “VICTORY” in violet on Official stamps. One census indicates there are 71 examples of the 20¢ light olive green stamp overprinted in this fashion, a number that includes the 20¢ stamp both without and with the “COMMON-WEALTH” overprint (Scott O42 and O43, respectively).

Kelleher sold an unused Philippines 1944 20¢ Official stamp without the “COMMON-WEALTH” overprint, handstamped “VICTORY” in violet (Scott O42), for $13,800, a realization significantly greater than the $8,000 value in the 2018 Scott Specialized Catalogue of United States Stamps and Covers.