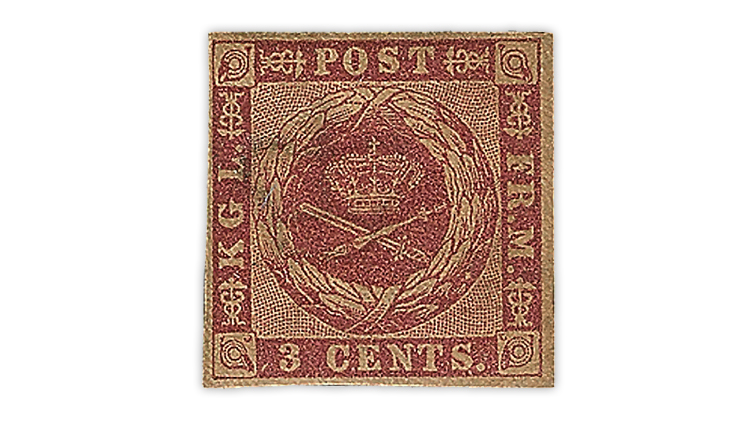 The Danish West Indies 3¢ dark carmine Danish Coat of Arms stamp with brown gum is of interest to collectors of U.S., Scandinavia, and world classic stamps.

Danish West Indies is the forerunner of the United States unincorporated territory of the U.S. Virgin Islands. The former Danish colony comprises the islands of St. Thomas, St. Croix, and St. John.

The Danish West India Guinea Co. annexed St. Thomas in 1672 to begin the colony. The king of Denmark-Norway assumed direct rule of the colony in 1775 after the company collapsed. After Denmark outlawed slavery in 1848, maintenance of the colony became a financial burden rather than an asset.

The United States purchased the colony from the Kingdom of Denmark in 1917 for $25 million. The strategic location of the islands made the territory a fine base for anti-submarine operations in protecting the Caribbean Sea approaches to the Panama Canal.

Because the Danish West Indies is a forerunner of a U.S. possession, its stamps provide a nexus for U.S. collectors who are also interested in Scandinavian stamps. They also appeal to classic stamp collectors.

The 3¢ dark carmine stamp with brown gum is the most affordable. The Scott catalog values the stamp in unused, with original gum condition at $210 and in used condition at $235, with the value in italics.

The stamp in very fine grade without faults is a good buy at 80 percent up to full catalog value. The catalog notes that the brown and yellow gums were locally applied.