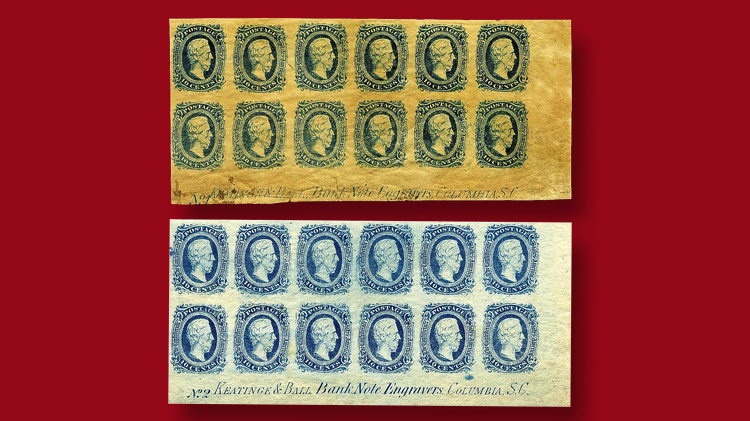 A Confederate States plate block of Scott 11, printed by Keatinge & Ball, with gum on the reverse (above) and another block with the gum removed (below).

Changes have been made in the way Scott catalog editors look at gum on some Confederate States stamps. One of two Special Features in the 2019 Scott Specialized Catalogue of United States Stamps and Covers is on this subject.

“Should we follow the seemingly gum crazed U.S. stamp market trend or save Confederate stamps for future generations of students before they literally self-destruct?” Kaufmann asked in the article.

Pictured nearby are two plate blocks of Confederate States Scott 11, the 10¢ blue engraved Jefferson Davis with no frame line that was printed by Keatinge and Ball and Archer and Daly. The block shown at top has its original gum on the back, and the block shown below has had the gum removed. It probably goes without saying which one has a better look to it.

Kaufmann’s article begins with the pronouncement “gum is a controversial subject.” I’m certain collectors of Confederate States stamps will want to see the details of this Special Feature and ponder the specifics outlined in it, especially notes about stamps that were printed using fugitive inks where the image might disappear after soaking.

The Scott U.S. Specialized catalog can be purchased at www.amosadvantage.com or by calling 800-572-6885.