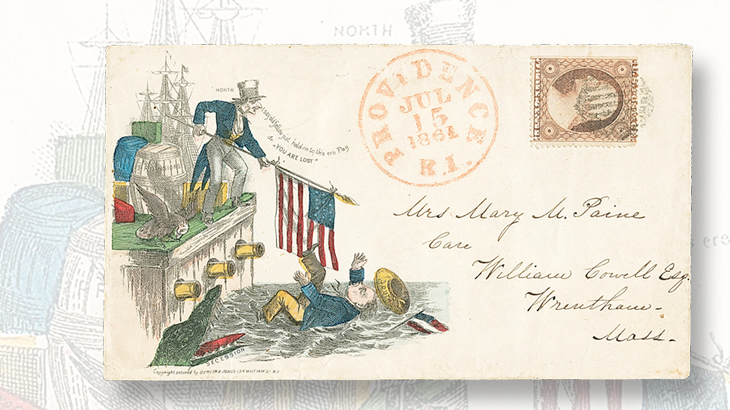 A Civil War cover with an Uncle Sam cachet sold at the Dec. 15 Robert A. Siegel auction of U.S. and Confederate states postal history for $17,825. 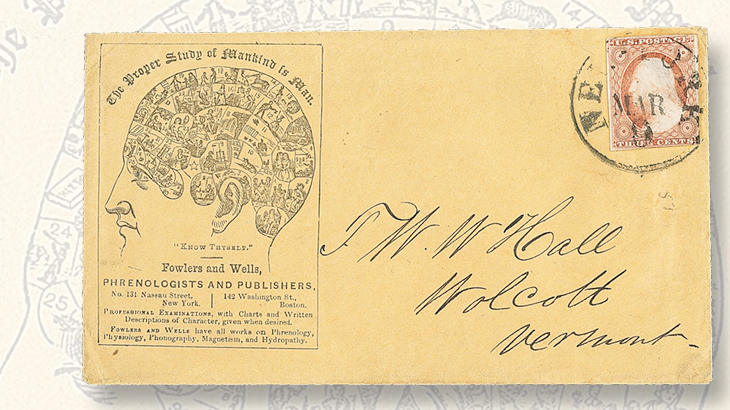 The pseudo-science of phrenology was promoted with the corner card illustration on this cover sold during the Dec. 13 Siegel auction in New York City. 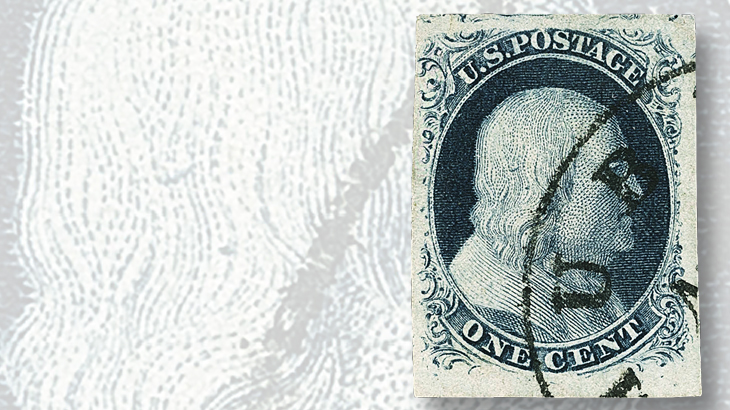 The Robert A. Siegel auction also included this 1¢ blue Franklin type III stamp with a neat cancel, which sold for $4,025. 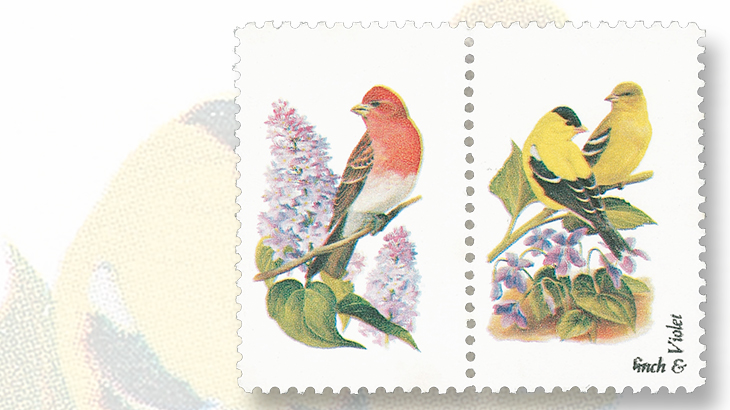 A rare color-omitted error from the 1982 State Birds and Flowers issue was auctioned by Robert A. Siegel for $1,840 on Dec. 14. 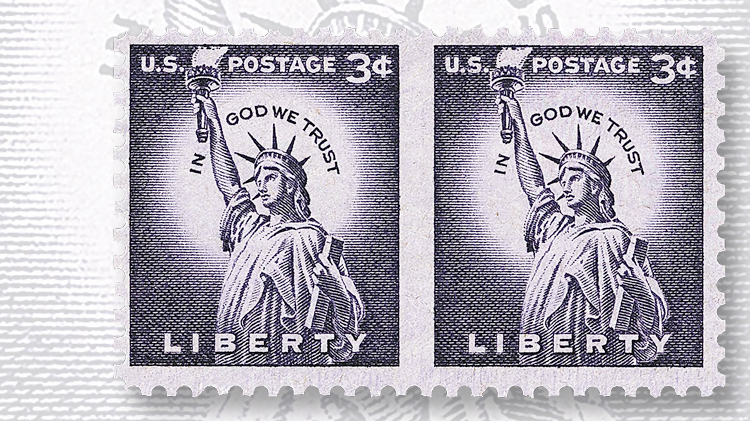 This rare imperf-between pair of the 3¢ Statue of Liberty stamp from the 1954-68 Liberty definitive series sold for $6,325 at the Dec. 14 Siegel auction in New York. 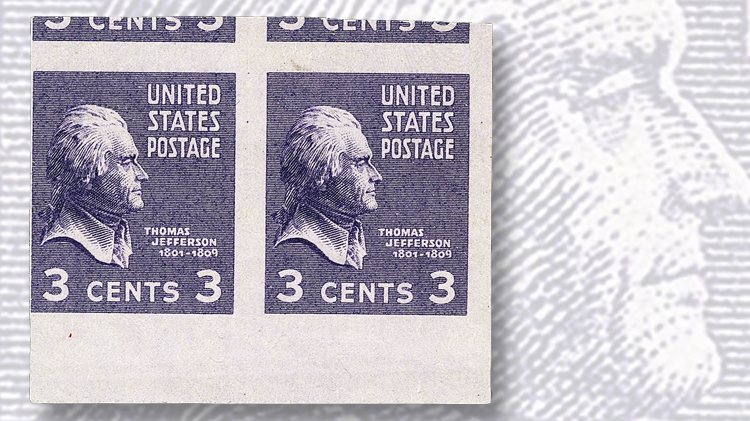 The Dec. 14 Robert A. Siegel auction also included this lightly hinged imperforate pair of the 3¢ Jefferson from the 1940 Presidential series, which sold for $3,450. 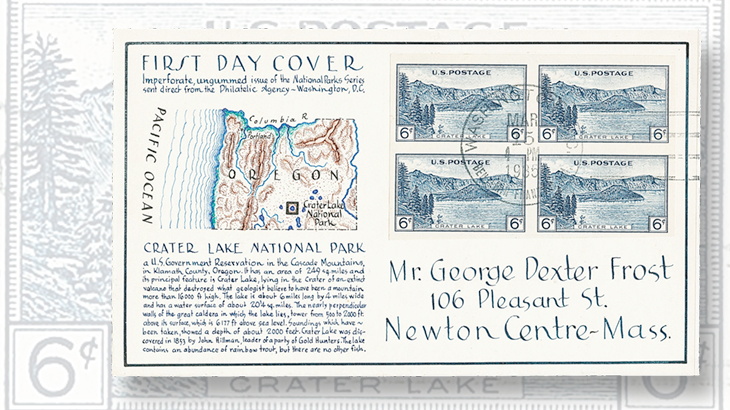 A set of 10 Laffert first-day covers for the 1934 National Parks issue, with each cover franked with a block of four, sold for $2,415 during the Dec. 15 Siegel auction. 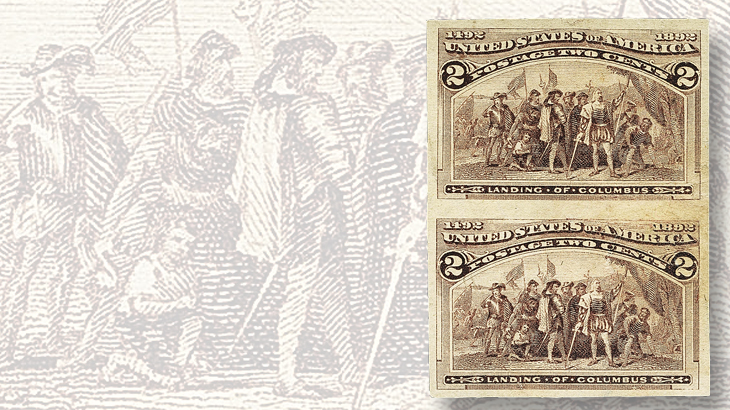 In its Dec. 14 auction of United States stamps, Robert A. Siegel sold this imperforate vertical pair, a variety of the 1893 2¢ brown violet Columbian stamp, for $2,415. 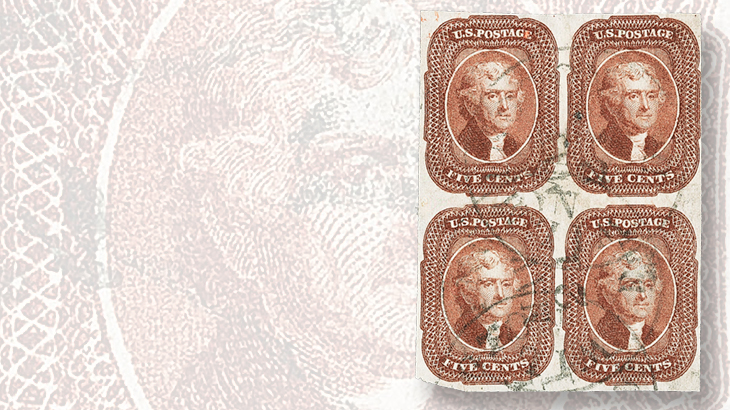 A lightly canceled used block of four of the 1856 5¢ Jefferson sold for $13,800 during the Dec. 13 auction of U.S. classics at Robert A. Siegel Auction Galleries in New York City. 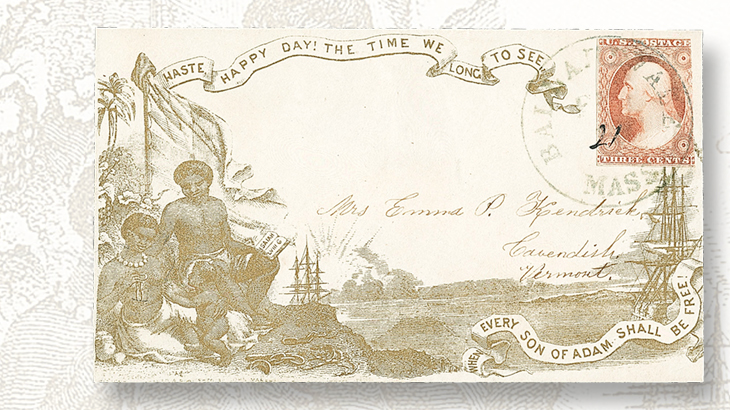 An elaborate British-made cover with an antislavery theme, franked with the 1851 3¢ Washington type I stamp, tripled its presale estimate at the Dec. 13 Siegel auction. 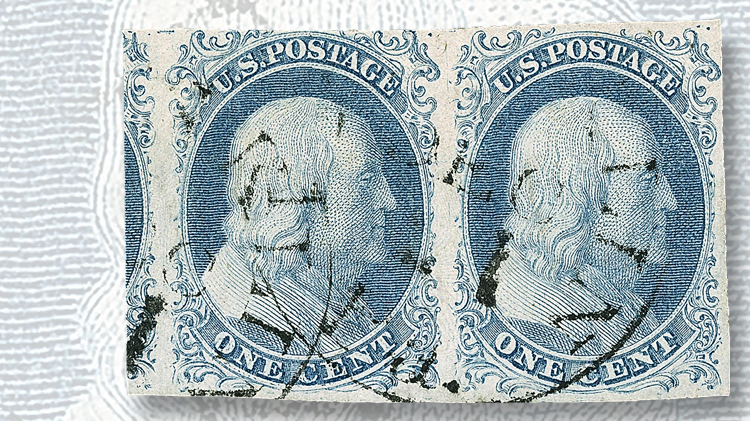 The Dec. 13 auction of U.S. classic stamps by Robert A. Siegel of New York offered this used pair of the imperforate 1851 1¢ blue Franklin type Ib, with triple transfer on the left stamp. The pair sold for $14,375. 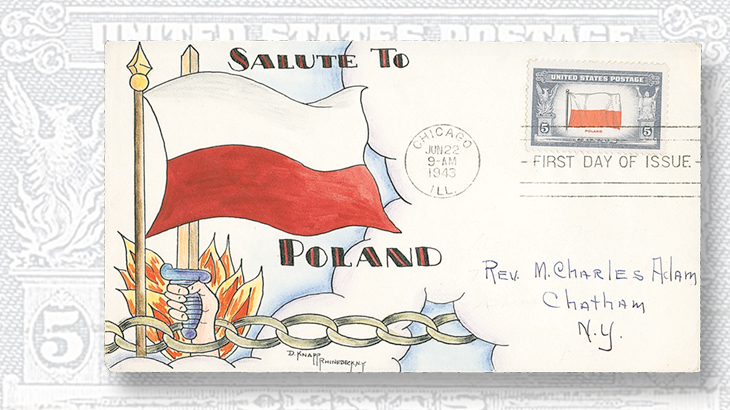 A complete set of 13 Dorothy Knapp first-day covers for the United States Overrun Countries set sold at the Dec. 15 Siegel auction for $6,037.50.
Previous
Next

Robert A. Siegel Auction Galleries held three days of sales Dec. 13-15 in New York City. The first day saw a charity auction to benefit the Smithsonian’s National Postal Museum in Washington, D.C.; this was followed by U.S. stamps the second day, and U.S. and Confederate postal history the final day.

The benefit auction featured material donated by Gordon and Ronda Eubanks, from his award-winning collection of the U.S. 1851-56 issue, with further items donated by Mark Schwartz and Robert Rose.

A pair of the imperforate 1¢ blue Franklin of 1851, with design characteristics designating it as type Ib (Scott 5A), was identified as coming from positions 3 and 4 of the right-hand pane of the plate 1 in its early state, which specialists indicate as 3-4R1E.

Type Ib stamps of this issue show complete frames at top and nearly complete at bottom. In addition, the left-hand stamp in this pair (position 3) shows the ghostly remains of its previous, misplaced entries on the plate, which happened not once but twice. This multiple re-entry of the design, in what is known as a triple transfer, is of great interest to specialists.

The used pair sold for $14,375, including Siegel’s 15 percent buyer’s premium that is added to all lots.

Another 1¢ is designated as type III because it has wide breaks in the outer frame lines at both top and bottom (Scott 8).

While other 1¢ type III stamps on the second plate had breaks at top and bottom, this stamp, from position 99R2, has the widest, because when it was re-entered, the rocking-in of the design from the transfer roller came up short at top and bottom — another example of the imprecise, artisanal nature of these stamps that makes them so fascinating.

With wide margins all around and a light cancel leaving the design clearly visible, this example sold for $4,025.

A magnificent, used block of four of the 1856 5¢ Jefferson (Scott 12), lightly canceled in Wilmington, Del., is said to be one of just a handful of surviving off-cover blocks of this stamp. It sold for $13,800.

A cover with a gold-ink abolitionist cachet reading “Haste Happy Day! The time we long to see when every son of Adam shall be free!” was franked with an 1851 3¢ Washington type I stamp (Scott 11) and sent from Massachusetts to Vermont.

A New York-to-Vermont illustrated 1850s cover bearing a 3¢ type II (Scott 11A), with an advertising cachet for a firm of phrenologists, sold for $172.50. The pseudo-science of phrenology, which measured the skull in an attempt to determine character and mental abilities, was medically discredited by the 1840s but remained popular throughout the 19th century.

The second day of the Siegel auction featured some seldom-seen imperforate varieties of U.S. issues, including a pair of the 2¢ Columbian issue of 1893.

Once listed as Scott 231b, this imperforate variety on stamp paper now appears to be listed in the Scott Specialized Catalogue of United States Stamps and Covers among the die and plate proofs as 231P5, and valued with minimal faults. (The Scott catalog listing mistakenly shows a 1¢ denomination, which the catalog editors will correct in the 2018 edition of the catalog.)

All examples of this variety emanate from an ungummed, damaged sheet found in New York in 1900.

The pair offered by Siegel, with very fine appearance despite faults including a sealed tear, sold for $2,415.

An imperf pair and imperf block of four of the 3¢ Jefferson from the 1940 Presidential series (Scott 807c) were offered with a note that despite catalog listings describing the pair as “believed to be unique,” it clearly isn’t.

The pair, lightly hinged with a large bottom sheet margin, went for $3,450, while the block, with minor faults but never hinged, fetched $3,335. Each item is accompanied by two or more expert certificates.

A rare imperf-between pair of the 3¢ Statue of Liberty stamp (Scott 1035b) from the 1954-68 definitive series is believed to exist only as having come from a miscut booklet pane. The pair brought $6,325.

Quick quiz: name all the official birds and flowers of all 50 states! A unique color-missing error from the 1982 State Birds and Flowers issue left all the black missing from a design showing a purple finch sitting on a lilac sprig (Scott 1981b), thereby omitting the name of the state, the denomination and the identifications of the species.

Just three stamps from a single pane of 50 different designs have such a misprint, meaning each of the three is unique. In the case of the error offered by Siegel, the stamp is in a se-tenant pair with a partial color-missing error of the New Jersey stamp, which shows goldfinches and violets.

The error pair sold for $1,840. Psst: the purple finch and lilac belong to New Hampshire.

The final day of the sale included a Civil War-era cartoon cachet on a cover sent in 1861 from Rhode Island to Massachusetts.

The hand-watercolored design shows Uncle Sam holding a U.S. flag out to rescue a drowning Southern Man beset by alligators.

Called “one of the rarest and finest of Civil War cartoon covers,” it sold for $17,825.

Twentieth-century cacheted first-day covers rounded out the sale, including a number by the popular cachet artist Dorothy Knapp.

A complete set of 13 hand-painted covers of the 1943-44 Overrun Countries issue (Scott 909-921) is thought to be one of just four intact sets done by her for these stamps, which honored the victims of Axis aggression in World War II.

The cachets show the nations’ flags, with a chained hand holding a sword rising from flames and each one is addressed to a Rev. Adam in Chatham, N.Y. The set brought $6,037.50.

A set of FDC’s by Laffert, with exquisitely detailed hand-drawn maps and elegant hand-lettering, were all franked with blocks of four of the 1934 National Parks issue, in the imperforate versions issued in 1935 by Postmaster General Farley (Scott 756-765).