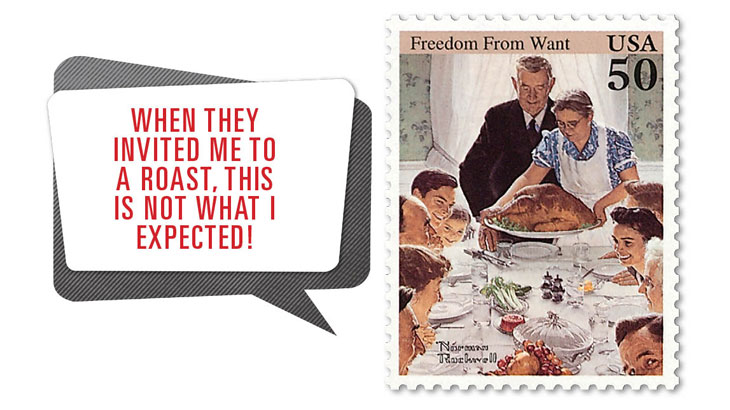 The winner of the nonphilatelic part of the December cartoon caption featuring the 50¢ Freedom From Want stamp from the 1994 Norman Rockwell souvenir sheet is Peter Karpoff of Silver Spring, Md., who suggests that the turkey is not happy being the guest o

COVID-19 was the predominant theme for the December 2020 cartoon caption contest featuring the 50¢ Freedom From Want stamp (Scott 2839), one of four stamps in the 1994 $2 Four Freedoms souvenir sheet.

Because of the delays caused by the Postal Service’s dismal performance during December and early January, Linn’s extended the contest deadline by a month so that all entries in the mail could be received. As a result, the announcement of the cartoon contest winners is a month later than usual.

Similarly the January contest report will be presented in March. After that we will be back on track.

For this contest, we asked for entries that speak from the perspective of the turkey.

Toni Heisey of Janesville, Calif., represents the group of pandemic-related entries with “My desire is for a 5th Freedom; “Freedom From COVID!”

Last-minute reprieves were the subject of another group of entries. Ed Pawlowski of Sun City, Ariz., has the turkey saying, “I waited and waited for a presidential pardon.”

For the nonphilatelic part of the contest, the winning entry was from Peter Karpoff of Silver Spring, Md.

Greg Best of Sacramento, Calif., won the philatelic part of the contest with “I didn’t have to be dead five years to get on this stamp!”

“The indignity of it all — now I’m going to be gobbled up!” from Alex Hamling of Seattle, Wash.

“Next up, a master carver. … Grandpa is an original Mt. Rushmore chiseler,” by Rosemary Harnly of Red Wing, Minn.

“Hey, you wouldn’t be laughing if you got this tan the way I did!” from Steve Billings from Memphis, Tenn.

“When I wished for things to get back to normal, this is not what I had in mind,” from Kenny Moore of Rocklin, Calif.

“Hey, you said you were making ham this year!” by David Vikan of Dickinson, N.D.

“I gave up buying mint U.S. cold turkey. Now, it looks like my goose is cooked!” from Steve Kotler of San Francisco, Calif.

Thanks and a tip of the hat to all who entered. The next contest will be announced in the March 8 issue of Linn’s.

Put yourself in a sleigh for the January cartoon contest