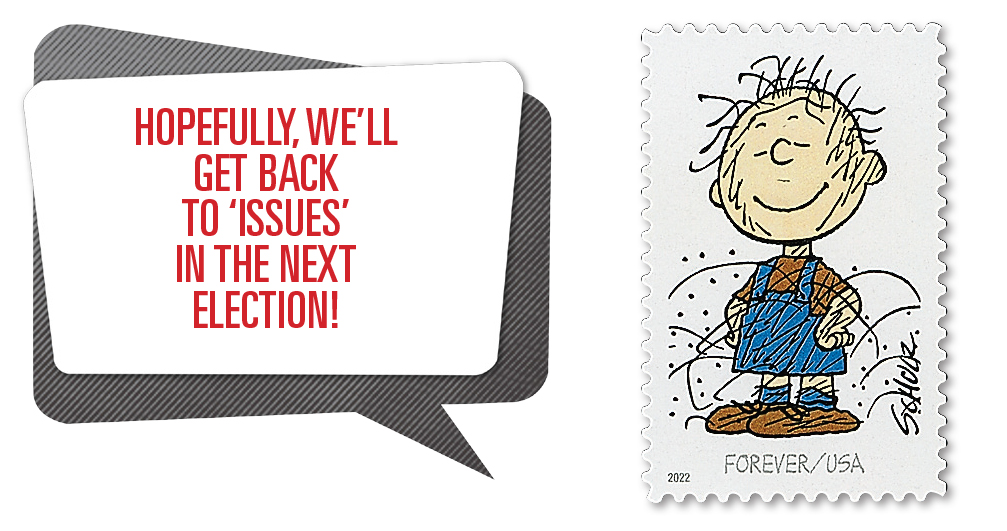 The winner of the nonphilatelic part of the December cartoon caption contest featuring the United States forever stamp featuring the Peanuts character Pigpen from the Charles M. Schulz pane of 20 (Scott 5725) is John DeBord from Vallejo, Calif.

Pigpen, the Peanuts character shown on the 2022 forever stamp in the box shown here, seems to have inspired Linn’s readers. Unlike the last contest where entries were sparse, Pigpen brought in a bumper crop. Because it was the December cartoon caption contest, quite a few entries mentioned Christmas.

Kay Don Kahler of Matthews, N.C., represents this group with “I’ll brush my hair if that assures a visit from Santa.”

Michael Moticha of Apple Valley, Calif., took a different tack, with a Christmas theme that brings in another popular concept: “I could play Santa. Sliding down dirty chimneys would be right up my alley.”

The interplay of dirt with stamp collecting came in for some attention. This group is represented by Merlin Dorfman of Livermore, Calif., who has Pigpen saying, “For some reason, my dad won’t let me near his stamp collection.”

A little social commentary snuck into some entries, one of which, from Bob Miller of East Brunswick, N.J., mirrors my own history: “This is my childhood picture. In my day, every kid played outside, and looked like this. Today every kid is inside playing video games. How sad!”

Commentary on the Pigpen persona was sent by several readers. Peter Elias of Plano, Texas, submitted, “Happy to say that dirt is FOREVER!”

Playing off Pigpen’s smile, Gene Grace of Anniston, Ala., suggested, “It’s OK; I had the most fun!”

Picking the winners was difficult, but the nonphilatelic winner shown in the box above seems particularly on target after the 2022 elections. It was submitted by John DeBord of Vallejo, Calif., and uses the “dirt” theme in an especially clever way.

On the philatelic side, the winner is Terry Murphy of Castle Rock, Colo.

Murphy’s entry probably requires a moment of hesitation for impact, but the taste of dirt is probably not attractive. The line is “Aren’t you glad I’m a self-adhesive!?”

“I’m going to work with the EPA when I graduate. With my magnetic personality the smog in Los Angeles will be gone in no time,” from David Vikan of Dickinson, N.D.

“I was just digging for dirt at USPS HQ,” by Michael Skweir of Northampton, Pa.

“Lucy will let me hold the football for Charlie Brown if I wash my hands,” from Edgar Dunlap of Gainesville, Ga.

“I was just working on some old stamps,” by Daniel Ring of Woodstock, Ill.

Thanks and a tip of the hat to all who entered. The next contest will be announced in the Feb. 13 issue of Linn’s.

Channel your inner elf for the January cartoon contest