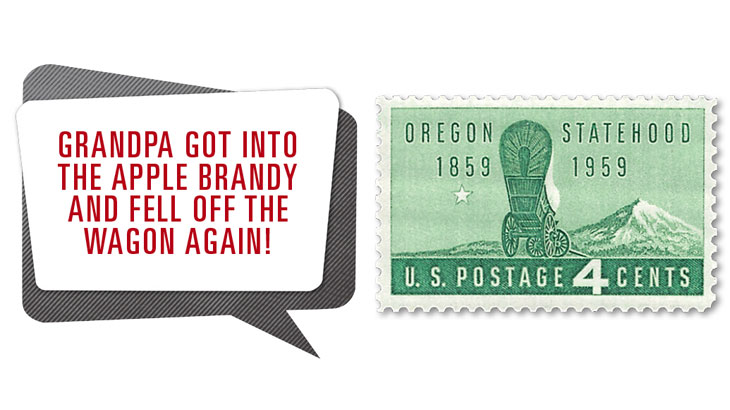 The December cartoon contest stamp, the 1959 4¢ Oregon Statehood commemorative (Scott 1124), features a covered wagon, but there are no animals to move it. Several entries in the contest proposed explanations.

Spike Savage of Presque Isle, Maine, proposed the thoughts of the wife to her husband: “I knew that 40¢ for those oxen was no bargain. Now we’re stuck out here on the plains, and No, I’m not going to push this while you pull.”

Mildred Barylski of Warrenton, Va., took a different approach: “Dang! Both my horses are lame. Where’s Triple-A when you need them?”

Greg Svoboda of Peoria, Ill., offered, “I know PMG DeJoy wants to slow mail delivery to save money, but this is ridiculous!” Of course, the question heard most often on family trips was recalled in multiple entries. The earliest of these was from Robert Dernedde of West Linn, Ore., “Are we there yet?”

Edgar Dunlap of Gainesville, Ga., wins the nonphilatelic part of the contest with an entry that combines an old saying with the stamp design.

On the philatelic side, the winner is Marshall Lew of South Pasadena, Calif., who came up with another headline, “Bulletin: The USPS has awarded a 10-year contract to manufacture a new generation of American-built delivery vehicles with almost no carbon footprint.”

“Sixty-three years ago 4¢ carried a first class letter. Can you believe it now takes almost 60¢?” by Mary Lou Moseley of Owensboro, Ky.

“From Mount Hood to Statehood, it’s all good in the hood. …” from Dale Stout of Colorado Springs, Colo.

“Wow! Look at that snowcap! Ma, did you bring the skis?” sent by Gordon Trotter of Sarasota, Fla.

“Do you think this view makes our rear look too big?” by John Gaffney of Exton, Pa.

“Why’s it always, circle the wagons; Just once can’t we square them?” sent by Richard Wolf of Westminster, Md.

“It’s awfully hot today. Mind if I put the top down?” from Steve Kotler of San Francisco, Calif.

Thanks and a tip of the hat to all who entered. The next contest will be announced in the Feb. 14 issue of Linn’s.