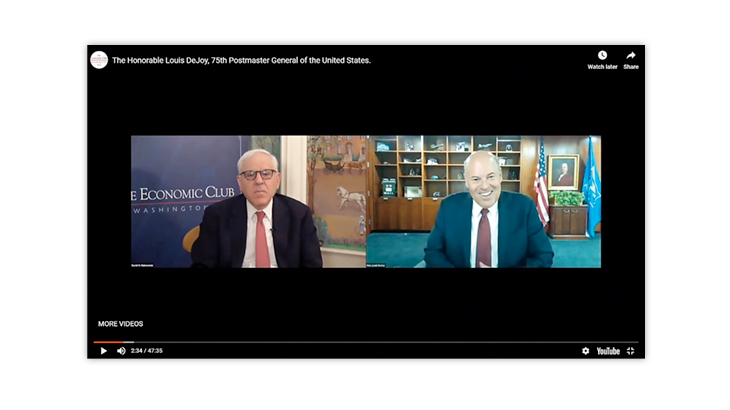 Postmaster General Louis DeJoy says he’s happy as the nation’s 75th postal chief and wants to remain in the job even if President Donald Trump fails to win re-election Nov. 3.

In one of his first interviews, DeJoy, a major Republican Party donor, said he is “very proud” to head the United States Postal Service despite all the controversy that he has encountered since taking office June 15.

“I don’t feel pressure,” he said in a video interview with David Rubenstein of the Economic Club of Washington, D.C., Sept. 24. Rubenstein, a philanthropist and co-founder and co-executive chairman of the private investment firm Carlyle Group, has conducted more than 100 interviews while serving as president of the Economic Club.

“I am having fun now,” DeJoy said. “I feel good and am going to charge forward.”

Asked if he would want to remain head of one of Washington’s largest federal bureaucracies if Democrat Joe Biden wins the presidency, DeJoy said he wants to remain.

“We have a plan and I would like to see it through,” he said, acknowledging that his agency has a “broken business model” that needs to be revised.

A former North Carolina logistics executive, DeJoy has been a strong financial supporter of Republicans, including Trump.

But DeJoy told Rubenstein he has bonded with the USPS leadership on how to change the agency for better financial times and wants to help lead the agency.

He repeated his statements that the Postal Service is ready to handle election mail and will be able to treat all mail-in ballots better than first-class mail.

DeJoy also repeated his admiration for the agency’s 650,000-member workforce.

“Their commitment is second to none,” he said, citing their performance during the COVID-19 pandemic.

He disclosed that 91 postal workers have died from the disease, and 10,000 have been sickened by it.

Currently about 2,000 employees are out sick, he said.

As for the Postal Service’s financial future, he said the agency needs $80 billion a year to operate but has an annual revenue of only $70 billion.

“We’re not looking for handouts,” he said, adding that nonetheless Congress should give the agency funds for the losses it attributes to the pandemic.

He estimated those losses at between $7 billion and $10 billion.

DeJoy’s statement that he wants to remain in office regardless of who wins the election may come as a surprise to his congressional critics who have called for him to resign over steps taken under his tenure that have slowed mail.

The postmaster general said he has been wrongly charged with instigating some of those actions, which were already underway before he took office.

Rubenstein did not ask about one of the Democrats’ biggest issues with DeJoy, his alleged role in getting his employees in North Carolina to contribute to Republican Party candidates he had endorsed.

Asked what the Postal Service needed to do differently, DeJoy said “we need to change how we approach the marketplace.”

Rubenstein asked him which organization a customer who wanted to send a letter overnight should pick: the USPS, Federal Express or United Parcel Service. DeJoy said the customer should pick his agency. “In general, we’re the cheapest,” he said.

Speaking as the head of the Postal Service, DeJoy said: “The most impressive thing to me is the organization’s ability to perform.”

On Sept. 24, shortly after DeJoy spoke, the Washington Post reported that senior postal officials in Washington had pushed in a July 10 teleconference to make operational changes that produced slower mail deliveries across the country.

The newspaper said the presentation undercut assertions by postal officials that lower-level officials outside Washington were largely responsible for the changes that slowed mail deliveries.

The Post said David E. Williams, chief of logistics and processing operations for the Postal Service, told those on the call that elimination of late and extra mail trips should be among their goals.