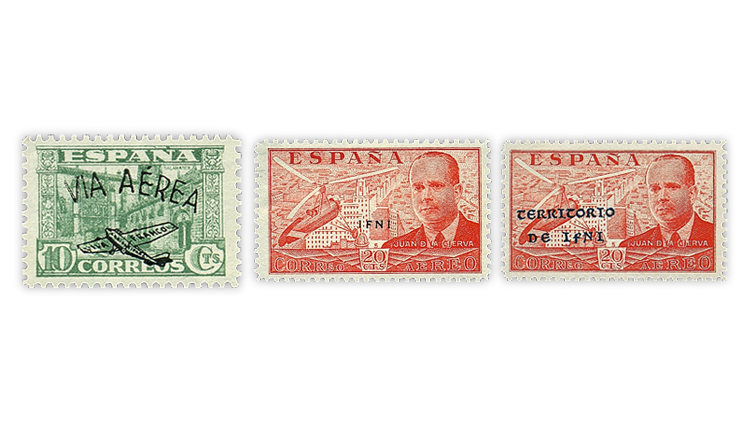 The delisted Ifni airmail stamps of the 1930s with privately applied overprints are popular with many collectors.

Ifni was a Spanish enclave on the Atlantic coast of southern Morocco. Spain originally established a settlement there in 1476, but abandoned it shortly afterward because of attacks by the Berbers. Morocco ceded the territory to Spain in 1860, but Spain again quickly lost interest in the sparsely inhabited area.

The real Spanish presence dates from 1934 when Col. Osvaldo Capaz of the Second Spanish Republic negotiated with local tribal authorities and took possession of the territory on behalf of Spain.

Spain developed Ifni as an important center of the seafood industry. The population stood at around 52,000 by the end of Spanish rule.

Ifni issued its first postage stamps in 1943 and its last stamps in 1968. Though no airmail stamps were issued until 1943, various airmail overprints were applied to Spanish postage and airmail stamps of the 1930s for Ifni airmail service.

The overprints include “Via Aerea” and the silhouette of a monoplane, “Ifni,” and “Territorio de Ifni.” The airplane silhouette has “Viva Franco” on the underside of the wings.

Being delisted by Scott certainly hasn’t hurt their popularity. The fact that they are no longer listed adds an allure of mystery that appeals to many collectors. These stamps sell quickly whenever they are offered.

Most sell for between $3 and $10. Poorly centered examples that have perforations cutting into the designs have no trouble selling. If you come across them in old general collections or dealers’ stocks, each of them is certainly worth a couple of dollars apiece.

Beautiful classic stamps from the African republic of Liberia

Appeal of Ray Charles reaches beyond the collecting community