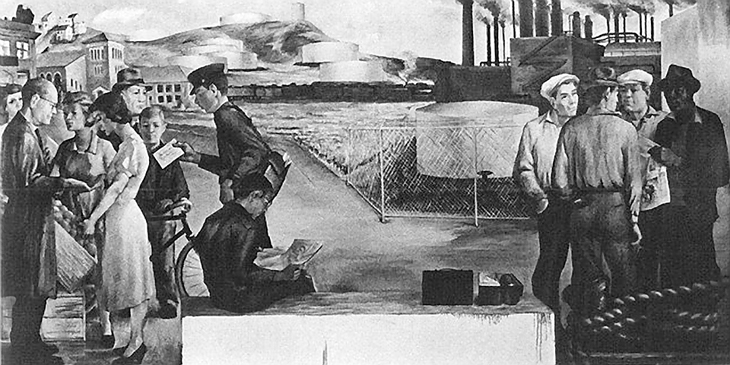 This Depression-era mural, the work of Diego Rivera protege Victor Arnautoff, was recently discovered in the basement of a post office in Richmond, Calif. It is to go on permanent display at the Richmond Museum of History. Image courtesy of National Archives.

A United States Post Office Department mural created by a protege of renowned muralist Diego Rivera, missing since 1979, has been discovered in a dusty crate in the basement of a Northern California post office.

The 10-foot wide painting shows a group of workers at a Standard Oil Refinery in 1940 on one side, and on the other side a group of Richmond townsfolk reading a newspaper and selling apples. A letter carrier delivering mail is approaching the townsfolk.

It soon will be placed on permanent display at the Richmond Museum of History in Richmond, Calif., according to an Oct. 2 report in the Contra Costa Times, a Bay area newspaper.

The mural is by Victor Arnautoff, a Russian native who was commissioned by the federal Works Progress Administration to produce murals for federal buildings in the Bay Area as part of a New Deal program.

Officials said the painting had been declared lost after the downtown Richmond post office was remodeled in 1979, but a former janitor of the building helped officials from the museum find it.

“This is huge for the museum,” Melinda McCrary, the museum’s director told the Contra Costa Times.

“There are many projects that specialize in documenting the New Deal and this piece will literally put Richmond on the map. Just as there are people who come to San Francisco in order to see Diego Rivera’s work, we are hoping they will come to Richmond to see this mural.”

Arnautoff, a figurative artist who studied under Rivera painted murals at San Francisco’s Coit Tower and other Bay Area buildings.

“This is public art at its very essence,” McCrary said. “It was paid by the public, owned by the public and will now be brought back to the public. We couldn’t be more thrilled.”