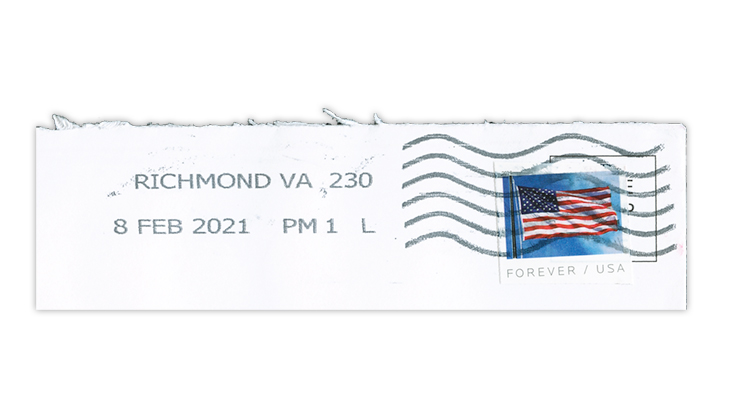 The United States 2019 Flag coil stamp on this cover, shown cropped, is missing the horizontal serpentine die cuts found on normal stamps. The cover was postmarked Feb. 8 in Richmond, Va., and sent to Amos Media, the parent company of Linn’s Stamp News. M

So it came as a bit of a surprise when a member of the Linn’s Stamp News editorial staff discovered a die-cutting omitted single of the 2019 nondenominated (55¢) Flag coil stamp printed by Banknote Corporation of America used on a cover sent to Amos Media, the parent company of Linn’s.

A positive identification of the stamp as a BCA printing is possible because of the microprinted “USPS” adjacent to the right side of the sixth red stripe from the top of the flag.

Linn’s and Scott catalog editors examined the stamp and agreed that it is a genuine example of the error.

Mint examples of the error were first found in late January 2020 by a collector in Illinois. Wayne Youngblood reported the details in the Feb. 24, 2020, issue of Linn’s, and the error was first listed in the 2021 Scott Specialized Catalogue of United States Stamps and Covers as Scott 5343a.

A close-up of the on-cover error, cropped from the intact cover, is illustrated here. The top and bottom of the Flag coil show no evidence of the serpentine die cuts found on normal stamps (Scott 5343).

Furthermore the top and bottom edges are not parallel to one another, which suggests that the sender likely used scissors to cut the stamp from a defective roll of stamps.

As Youngblood reported, the 2019 Flag coil error was “one of only three reported on U.S. stamp issues of 2019. The other two were die-cutting omitted errors on the USS Missouri (Scott 5392) and George H.W. Bush (5393) commemorative issues, both also produced by BCA.”

“Increased advancements in stamp printing technology have greatly reduced both the scope and number of major errors reported on U.S. stamps in recent years,” Youngblood wrote.

Linn’s was unable to reach the sender of the cover, who lives in Norfolk, Va., as the March 22 issue was going to press.