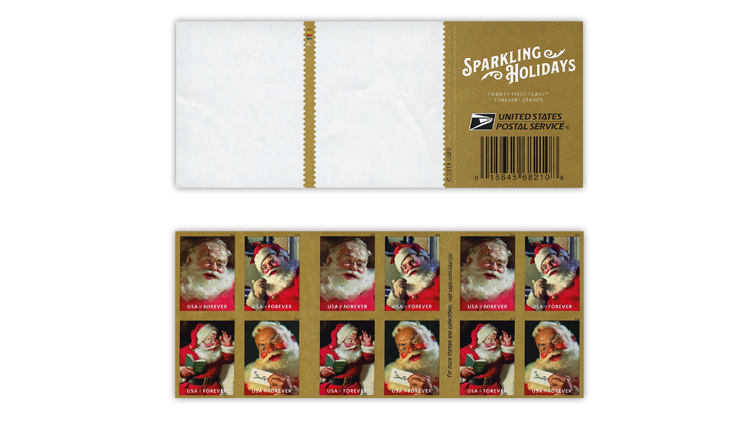 A new die-cutting omitted error of the United States 2018 Sparkling Holidays Santa booklet stamps (Scott 5332-5335) was discovered at a post office in Colorado in late December 2020.

The error occurs on the 12-stamp side of a partial double-sided booklet pane of 20 (Scott 5335b) that Ken Beiner of Colorado purchased at his local post office on Dec. 30.

Both sides of the booklet that Beiner acquired are illustrated nearby. The eight stamps on the front side that includes the “Sparkling Holidays” booklet label had been removed by another customer, according to Beiner, who sent the booklet to Linn’s for examination.

The 12 stamps on the back side of the booklet show no trace of the serpentine die cutting that allows for removal of individual stamps from the pane. Faint impressions of the die cutting on the backing paper on the eight-stamp side of the pane indicate that the stamps that had been removed were normally perforated.

Beiner provided additional details to Linn’s in early January. He said that the clerks at his post office call him “the stamp guy” because he uses many different older stamps on his mailings that they “find interesting and colorful.”

When Beiner went to the post office on Dec. 30, one of the clerks mentioned the partial Sparkling Holidays Santa booklet pane and told Beiner that another customer had returned it out of frustration because the stamps couldn’t be removed on one side of the pane.

“Upon examination I noticed that the die cut was missing on one side only making the stamps imperforate on one side only as they were able to use the others that had been properly die cut,” Beiner told Linn’s. “Unfortunately they wrinkled the remaining stamps trying to remove them.”

The customer must have tried several times to remove the imperforate stamps from the pane because numerous wrinkles and bends are visible on the 12-stamp side of the pane.

These imperfections are not readily apparent on the accompanying illustration of the pane.

Beiner asked the clerk if she had more Sparkling Holidays Santa booklet panes, but she said they were sold out.

“So unfortunately I couldn’t go through more to see if there were more errors available,” Beiner said.

The clerk also told Beiner that it was likely that the customer who originally bought the error booklet pane likely did so at a local supermarket that sells current U.S. stamps at face value before returning the booklet to the post office.

In its present configuration, the partial booklet would yield three die-cutting omitted blocks of four if it were broken up.

This new error listing will appear in Vol. 1A of the 2022 Scott Standard Postage Stamp Catalogue to be published in April, and in the 2022 Scott Specialized Catalogue of United States Stamps and Covers set for publication in October.

As for Beiner, he was quite pleased with his error discovery that came on the cusp of the new year.

“I was thrilled to be the first to discover this new error. It was a nice way to start the new year after all of the Covid mess,” he said.

Beiner told Linn’s that he planned to sell the Sparkling Holidays Santa error booklet pane at some point. “I’m more of a dealer than a collector,” he said.