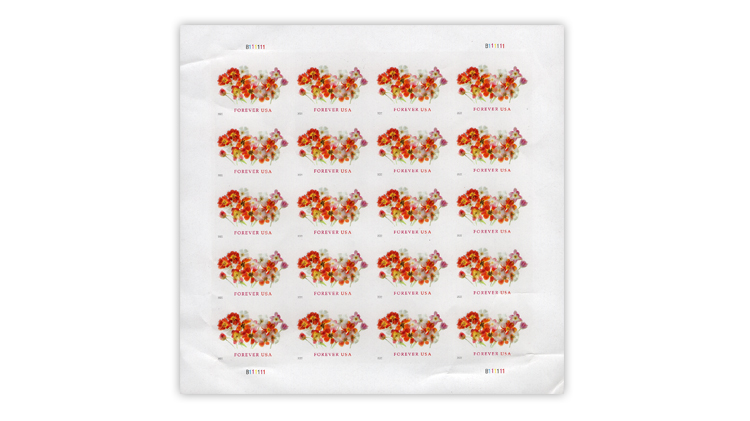 A new die-cutting omitted error of the United States 2022 nondenominated (58¢) Tulips forever definitive stamp (Scott 5681) has been discovered in Greenville, S.C. The printing mistake was found on a small number of intact panes of 20.

“Panes of the 2022 Tulip Forever stamps (Scott 5681) with no perforations have recently been discovered,” the article said.

“The panes were purchased at a post office in Greenville, South Carolina and were single panes acquired in the purchase of multiple sheets of the same stamp.”

The article in the Specialist did not carry a byline, so Linn’s Stamp News contacted Martin Kent Miller, editor of the journal, for more information.

Miller told Linn’s that he discovered the error at the Greenville post office.

“The postal clerk (who asked that they not be identified) confirmed that three other panes had been returned by retail customers and that at least two of them were from a single large purchase,” Miller said.

“The pane that I have was a single acquired in a purchase of twelve total panes. The postal clerk referred to them as ‘defective sheets’ and said that [they] were ‘returned to be destroyed.’ ”

At Linn’s request, Miller sent his error pane, which is pictured here, to Linn’s and Scott catalog editor-in-chief Jay Bigalke for examination.

“There is no trace of die cuts on the front” of the pane, according to Bigalke. He pointed out that the back of the pane (not shown) is normal and has the horizontal and vertical rouletting that facilitates separating individual stamps from the pane.

The illustrated error pane shows noticeable wrinkling in the top left, bottom left and bottom right corners, likely caused by someone trying to remove a stamp from the pane without realizing that the serpentine die cuts around the stamps are missing.

Miller told Linn’s that he thinks other error panes exist.

“My anecdotal evidence suggests the existence of at least four panes,” he said.

“I asked the clerk to contact me if more surfaced, but they simply smiled.”

Bigalke said that the new Tulips die-cutting-omitted error will be listed for the first time in Vol. 1 of the 2024 Scott Standard Postage Stamp Catalogue, which is scheduled for publication in April 2023.

The Tulips stamp was issued March 24 at Mount Vernon, Wash., without an official first-day ceremony.