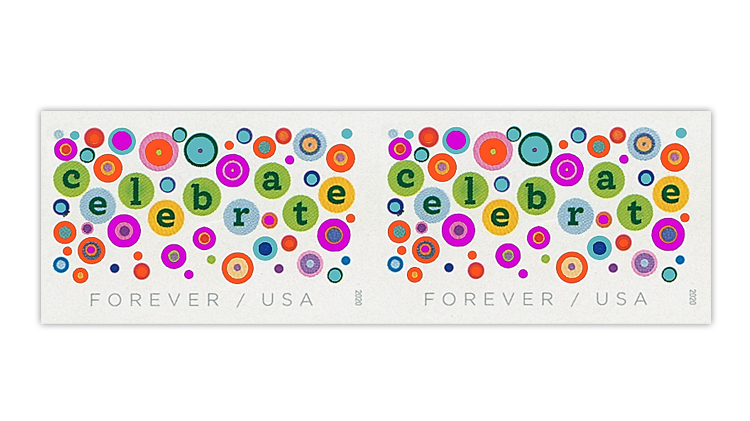 A collector recently discovered 20 die-cutting omitted panes of the United States 2020 Let’s Celebrate stamp at a post office in Washington state. A horizontal pair, digitally cropped from an intact error pane the collector sent to Linn’s for examination,

Just over a year after the stamp was issued on Feb. 14, 2020, multiple panes of the United States nondenominated (55¢) Let’s Celebrate stamp (Scott 5434) with die cuts omitted were discovered at a post office in a town in Washington state.

A horizontal pair of the new error, digitally cropped from one of the intact panes, is illustrated here.

The collector who discovered the new Let’s Celebrate error first contacted Linn’s about his find on March 18.

“I was wondering if you were aware of other Let’s Celebrate sheets that are also imperforate and how one goes about obtaining a value for the sheet. Any assistance would be greatly appreciated,” the collector wrote.

Linn’s and Scott catalog editor-in-chief Jay Bigalke asked him to send the pane for examination. The collector, who wishes to remain anonymous, agreed to do so.

Bigalke received the pane on March 30. After a careful examination, he informed the collector the same day that there was “no trace of die cuts on either side of the pane.”

The collector’s discovery was aided by a clerk at his local post office who contacted him.

“I received a call from a clerk at my local Post Office (there is only one in town) who asked that I stop by to look at a sheet of stamps that he had found,” the collector told Linn’s March 31.

“He is aware that I am a stamp collector. When I got to the post office, he handed to me the sheet of Let’s Celebrate and I immediately realized that the sheet was imperforate,” the collector said.

The post office had 20 die-cutting omitted Let’s Celebrate panes in stock, according to the collector. He said he bought eight of the 20 error panes.

The collector said that no additional die-cutting omitted Let’s Celebrate panes were found at his post office.

“I actually check several post offices in other towns and none of those post offices had an imperforate sheet. My post office had many perforated copies of the sheet,” he said.

His serendipitous find came too late for inclusion in the U.S. listings in Vol. 1A of the 2022 Scott Standard Postage Stamp Catalogue, which was published in early April.

However the error will be listed in the 2022 Scott Specialized Catalogue of United States Stamps and Covers, which is scheduled for publication in October.

Bigalke said the new error, Scott 5434a, will be listed as “Die cutting omitted, pair.”

The collector said he plans to keep his Let’s Celebrate error panes unless he receives “an offer too great to refuse.”