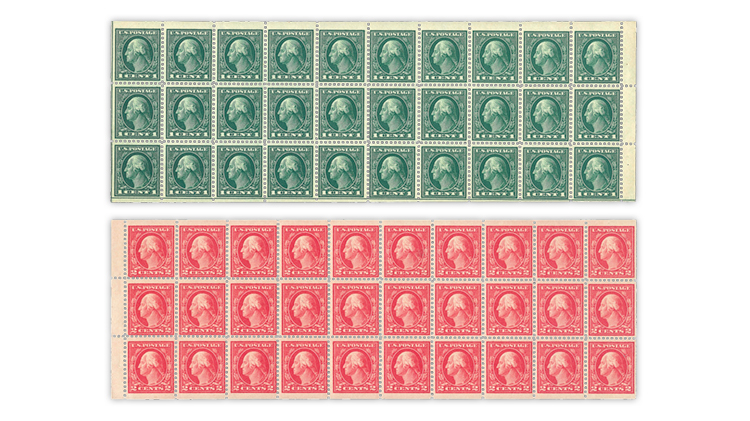 These 1¢ and 2¢ American Expeditionary Forces booklet panes of 30 are typical examples of the format created for use by armed forces personnel who were sent in 1917 to fight the Germans in France. Images courtesy of Robert A. Siegel Auction Galleries.

American Expeditionary Forces booklets of 1¢ green and 2¢ rose Washington stamps were issued in August 1917 primarily for use by United States servicemen in France during World War I, but they also were for use by other Americans attached to the military (for example, Red Cross, YMCA and press representatives).

Only 3,000 booklets were prepared for each stamp. The booklets contained 10 panes of 30 stamps. Intact panes of the two stamps are pictured here.

The booklets arrived in Europe in August and September. But shortly after that, on Oct. 3, 1917, Congress voted to allow active duty members of the armed forces in France to send first-class mail without payment of first-class postage, nearly eliminating the need for these stamps. This franking privilege was given effect by an adjutant general’s order dated Oct. 20, 1917.

According to an article by R.B. Preston in the Nov. 6, 1917, Scott’s Monthly Journal, the privilege of the free frank was only extended in cases of urgent necessity to civilians with the Army. That exception was revoked by the War Department on Dec. 3, 1917. From that point on, mail from associated civilians was required to bear stamps.

The franking privilege remained in force until Oct. 20, 1922, so it may be presumed that military postal service was available for U.S. military personnel and their associates until that date. While the great majority of mail handled would have been stampless, the franking privilege applied only for first-class letter mail, so in theory at least, AEF pane stamps could have been used not only on mail from military associates, but also on military mail that was sent registered, printed matter, postal money orders or parcel post.

That said, there was never a second production order for AEF stamp panes, and it is unknown how many survive today. It is said that a quantity of the panes was not sold and that they were destroyed.

Expertization is required for both panes and usages of the stamps on cover because it is possible, though not easy, to make credible-appearing fakes using relatively inexpensive stamps from the 1¢ and 2¢ sheets of 100.