Dinosaurs show off their moves on new pane of forever stamps 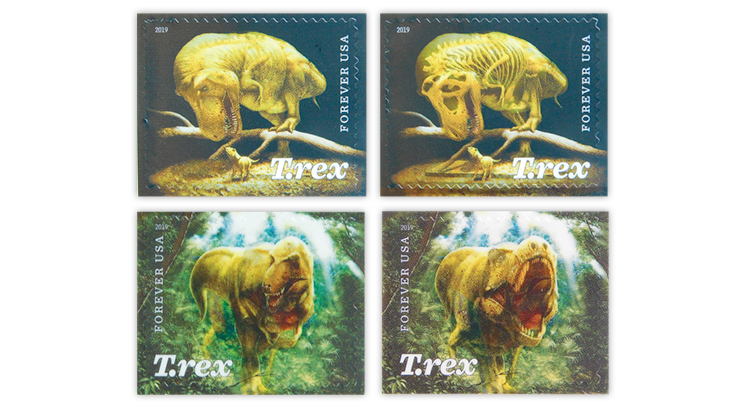 Two of the four stamps in the new United States Tyrannosaurus Rex set change designs when the stamps are angled from top to bottom. Shown here are side-by-side images of the two versions of those changing designs.

The Tyrannosaurus Rex forever stamps issued Aug. 29 have a different feel to them, and two of the new stamps can show you a new look as well.

The nondenominated (55¢) stamps, issued in a pane of 16, have a very fine lenticular coating that alters your perception of the image that appears on two of the four T. Rex stamps.

The lenticular process has been around for decades. In the 1960s it was used to create a three-dimensional effect on stamps with nature and space subjects issued by Bhutan.

In 2018 the United States Postal Service issued a three-stamp souvenir sheet titled The Art of Magic that shows a white rabbit popping out of a magician’s black top hat (Scott 5306). That issue also used the lenticular process with a refined variation on the 1960s plastic overlay.

As a regular commemorative issue, the new T. Rex stamps will be more commonplace than that Magic souvenir sheet. Every pane of the T. Rex stamps has an edge-to-edge surface coating, but only two of the four stamps in the set (eight of the 16 stamps on the pane) take advantage of it.

The two stamps showing the young T. Rex watching a flying bug and the larger T. Rex chasing a mammal through the woods display no change.

If you slowly tilt the pane from top to bottom and look at just one of the stamps with motion — the second stamp from left in the top row, for example — you should see the scene change from one illustration to a second illustration.

That second stamp in the top row shows the adult T. Rex in the forest looking to the left (his right), and then the scene changes to show the same T. Rex a little closer with his mouth wide open, as though he’s letting loose with a fearsome roar.

The larger T. Rex on the first stamp in the second row changes from a skeletal display to one looking quite alive with full skin covering.

The effect on these stamps is not as immediately obvious as it is on the Magic souvenir sheet, possibly because the artwork on the T. Rex stamps is more detailed.

The new stamps are available in full panes of 16 from U.S. post offices and from Stamp Fulfillment Services, which sells and ships stamps for USPS mail orders.