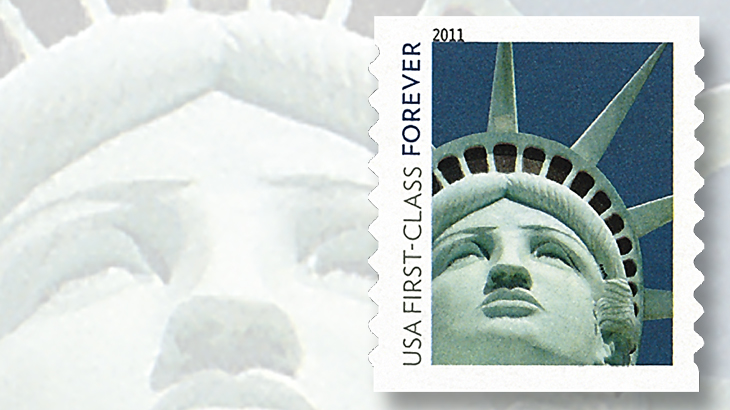 The four-year-old lawsuit between sculptor Robert S. Davidson, whose Las Vegas replica of the Statue of Liberty appears on a 2010 United States stamp, and the U.S. Postal Service has been ordered to trial.

A federal judge has ordered a dispute over the Lady Liberty stamp that the United States Postal Service mistakenly produced in 2010 to go to trial in September.

Federal Claims Court Judge Eric G. Bruggink rejected motions by both the Postal Service and sculptor Robert S. Davidson that would have effectively ended a four-year-old lawsuit over a stamp that was based on a replica of the Statue of Liberty.

The judge put aside motions for summary judgment and ordered a trial on liability and damages to begin Sept. 11 in Washington, D.C.

The postal official who oversaw stamp designs later said he would have never selected that image if he had realized it featured a replica.

The error was discovered not by the Postal Service but by Sunipix, a stock photo agency, which notified the USPS of the error.

In a July 18 ruling, Bruggink rejected the government’s arguments for summary judgment, which he said were based on a faulty premise that “photographic copying of a public architectural work does not constitute copyright infringement.”

“The premise behind the government’s defense is … wrong,” he wrote.

Congress in 1990 added a provision that allows “sculptural works” to be protected as “works of authorship” under the Copyright Act, the judge said.

“Even if the replica were viewed by the public as a design element of the casino, as defendant’s experts contend, that does not strip plaintiff’s work of its protection as a sculpture.”

The judge said: “There is no question that plaintiff was invoking the Statue of Liberty, in his replica, but he argues that his intent was not merely to copy and that the replica is unique.”

“He contends that the face which is the only aspect copied in the stamp at issue, was intentionally not a perfect copy of the original,” the judge wrote.

Postal lawyers argued that the differences between the replica and the original “are too subtle to warrant protection as an original work,” Bruggink said.

They also said they are entitled to “fair use” of the Lady Liberty design even with “protected elements” of Davidson’s design, the judge said.

Davidson argued that the Postal Service sold millions of the stamps, but the USPS countered that those sales “have a minimal potential for reducing plaintiffs’ ability to make further commercial use of the replica.”

Putting those factors together makes it impossible to grant Davidson’s motion for summary judgment nor does it allow for a Postal Service motion to reject the claim, the judge said.

Postal Service spokesman David A. Partenheimer said, “We have no comment due to the ongoing litigation.”