‘Do I have a great rarity? I hope so.’ The triumph of hope over reality 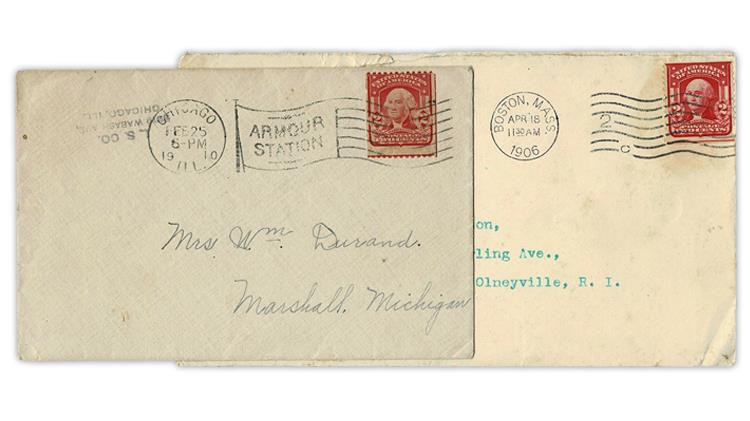 Figure 1. These two covers with examples of the United States 2¢ Washington and Shield stamp are either gems of philately or instances where stamps have been altered to resemble rare varieties. What do you think? The Chicago, Ill., to Marshall, Mich., cover with a stamp identified as a possible Scott 321 is partially superimposed over the Boston, Mass., to Olneyville, R.I., cover with a stamp that might be Scott 322. 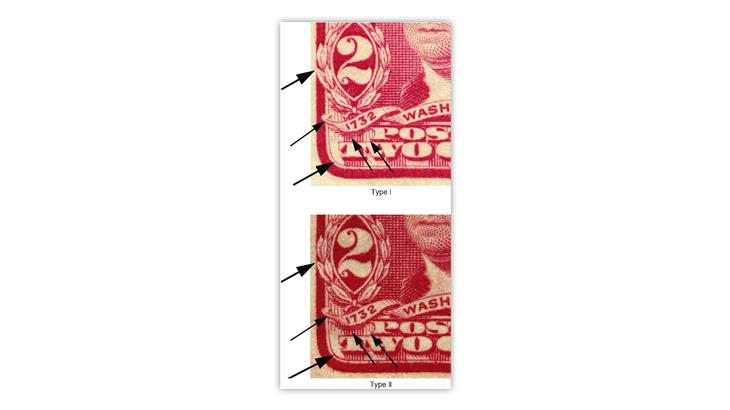 Figure 2. Often the Scott Specialized Catalogue of United States Stamps will present information that is key to determining whether a stamp is what it is thought to be. Such information for the Figure 1 covers is the details of die types I and II (shown here from the 2022 catalog) of the 2¢ Washington and Shield stamp.
Previous
Next

As Alexander Pope wrote in An Essay on Man, “Hope springs eternal,” and it is no less true for stamp collectors than anyone else.

Take a look at the two covers in Figure 1. The United States 2¢ George Washington and Shield stamps on them could be surmised to be Scott 321, the perforation gauge 12 vertical coil that catalogs $310,000 in italics used on cover in the 2022 Scott Specialized Catalogue of United States Stamps and Covers and Scott 322, the perf 12 horizontal coil that has a dash for used examples in the catalog but a $7,000 value for mint examples.

Because the owner paid only a few dollars for the covers, he was excited by the possibilities for profit when he noticed the stamps in the form of coils. The notes in the Scott U.S. Specialized catalog include this clear statement, “All examples of Nos. 321-322 must be accompanied by certificates of authenticity issued by a recognized expertizing committee.”

So, he looked at the rules and costs to have expertizing done and concluded that the cost, calculated on the basis of the catalog value, would be more than he wanted to pay. Not unreasonably, he then set out to find dealers and friends who could give him an informal opinion as to whether the two stamps on cover would likely pass as genuine.

In his enthusiasm, he had not bothered to read the fine print in the catalog listings, but his friends did. As is explained with the Scott catalog illustrations of the types, shown here in Figure 2, there are two types of the 2¢ George Washington and Shield: Genuine Scott 321 examples are type I and genuine 322 examples are type II.

A careful look at the stamps on the covers in Figure 1 shows that they are both the wrong type to be what the owner hoped for. The presumed Scott 321 is a type II, and the presumed 322 is a type I.

Further, according to the Scott catalog, only two examples of Scott 321 on cover are known, and both were used from Indianapolis, Ind., in 1908. The use on the possible Scott 321 cover is from Chicago in 1910.

There is no listing for on-cover examples of Scott 322. The dash for a used value of this stamp indicates that at least one used example is known, but there are no recent sales to guide the assigning of a value. Presumably, if expertized on-cover examples were known, this also would have been listed, likely with a dash.

So far, we have two strikes against both covers. The third strike is evident from the stamps themselves. Note that each has a solid carmine line on one of the imperf sides of the supposed coils. The problem here is that these stamps were printed from plates that produced sheets of 400 stamps. These sheets would eventually be quartered into post office panes of 100.

The process of quartering the sheet into panes of 100 relied upon the fact that solid lines of the same color as the stamps bisected the sheet both horizontally and vertically. When the sheets were perforated after printing and gumming, the space between stamps where the lines had been printed were not perforated.

Thus, where you see single stamps or strips with lines and no perforations, chances are that they came from panes of sheet stamps, not from sheets processed into coils. And what this means is that the stamps on the two Figure 1 covers have been trimmed on the side opposite the imperf edge so that they would resemble the expensive coils.

It would not be useful to have the covers expertized because there is no chance that they would be found to be genuine.

To read more about expertizing and no opinion certificates, subscribe to Linn’s Stamp News.