Do you want access to great libraries? Search the APRL’s Philatelic Union Catalog 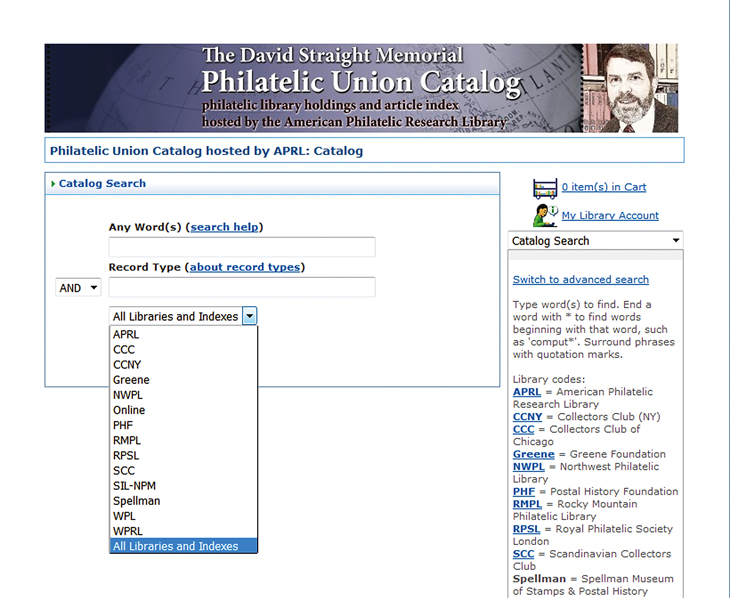 In his Collecting Canada column, Fred Baumann salutes the British North America Philatelic Society (BNAPS), and mentions one of the society’s greatest assets, its philatelic library, which is now available online.

In this column in the Aug. 24 issue of Linn’s, I referred to the American Philatelic Research Library in Bellefonte, Pa., as a “gift to stamp collectors.”

The BNAPS library and the APRL are two of many libraries available to stamp collectors, and some philatelic libraries are available online.

For the benefit of stamp collectors and stamp collecting, the APRL brings together several of the world’s greatest philatelic libraries in its Philatelic Union Catalog. The catalog provides collectors the opportunity to access the “card catalogs” of these libraries with a single search.

Collectors can search the vast holdings of participating libraries by completing a search form at the APRL website.

Members of the APS or APRL can enter requests to borrow books or obtain scans or photocopies directly from the online Philatelic Union Catalog.

Simply select the book or article desired, and click Add to Cart. You can review the cart and enter any special instructions, including whether you prefer scans or photocopies of journal articles.

The cost of borrowing books is a nominal fee and postage to your location and back to the APRL.

The APRL online catalog is an invaluable research tool. Linn’s editors use it frequently to find articles that have been published in journals that we have in our own library and to obtain articles that we otherwise would not have access to.

We highly recommend this unrivaled resource to our readers.