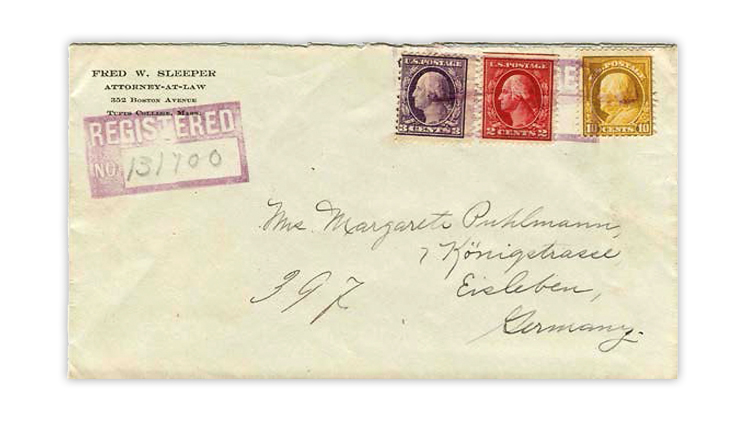 This cover is the earliest known use of Scott 416a, the brown yellow variety, as established by Fourier-transform infrared (FTIR) spectroscopy. Shown courtesy of Kevin Lowther.

If you have something you need to have expertized, you probably have an expectation of what the result will be. You can send the item in asking if it is genuine or not and hope for the best, but is that the best strategy? My answer is no.

It is better to approach the effort as an attorney approaches a witness during a trial. In general, attorneys don’t ask a question unless they know what the answer will be. “No surprises” is the watchword. Whether the object is a conviction or a successful defense, attorneys do their homework before they ask their questions, and that is the better approach to applying for an expert certificate.

But if you could be certain of the answer, couldn’t you do without the certificate? Well, not exactly. You have to satisfy either a buyer or seller that the item is what you say it is, and chances are, they are going to want to see a certificate.

How do you maximize the chance that you will get the opinion you believe to be correct? You do your homework.

This can be simple. Of late, I have seen a dozen requests for certificates where the patient (the item to be expertized) is obviously not the desired item. This may be because the submitter has not bothered to determine the perforations correctly, has not used the internet to determine what “lake” or some other color looks like, or hasn’t compared the patient to illustrations or measurements available in the Scott catalog.

The result is a turndown of something that the submitter easily could have determined. Not only is the submitter disappointed, but time and money have been wasted. I might suggest that regular submitters who learn to rule out potential patients might spend the money saved on resources that can be used to increase their competence.

These include precise measurement tools, a high-power magnifier, a first-class tagging detector that does both shortwave and longwave, and philatelic literature that can increase your knowledge and ability to do your own prediagnosis.

A submitter who checks what he or she can about the patient, and perhaps appends a note to the request form stating the reasons why it could be the proposed Scott number, will predispose an expert to take the patient more seriously. And this can influence the opinion if the submitter makes a good case.

In this column, we have two examples of more complicated submissions that required even more preparation on the part of submitters.

The first is the cover shown here. It is a landmark item because it shows the effect on expertizing of recently developed technology.

The cover was a find by Kevin Lowther, who has been studying the brown yellow versions of the yellow 10¢ Washington-Franklin issues for 50 years.

For the variety to be recognized by the editors of the Scott Specialized Catalogue of United States Stamps and Covers, the presumption has to be that the stamps were printed in a distinctive shade other than the one originally intended, resulting from the accidental mixing of pigments at the Bureau of Engraving and Printing.

But this has been difficult to prove because yellow stamps can be affected by all sorts of external stimuli, often by sulfur. The result is that expertizers have reflexively treated most examples as changelings, and for the most part, I suspect that this was the proper finding.

However with the advent of Fourier-transform infrared (FTIR) spectroscopy, it is now possible to determine the chemical identities of components used in printing inks. And Harry Brittain, a philatelist and forensic chemist, had the needed equipment and was willing to work with Lowther to establish whether the brown yellow versions of Washington-Franklins could indeed be a genuine printing varieties.

To make a long story short, it has now been established that some of the brown yellow stamps can be determined to be printing varieties, while others are changelings.

To read the rest of this column about expertizing, subscribe to Linn’s Stamp News.