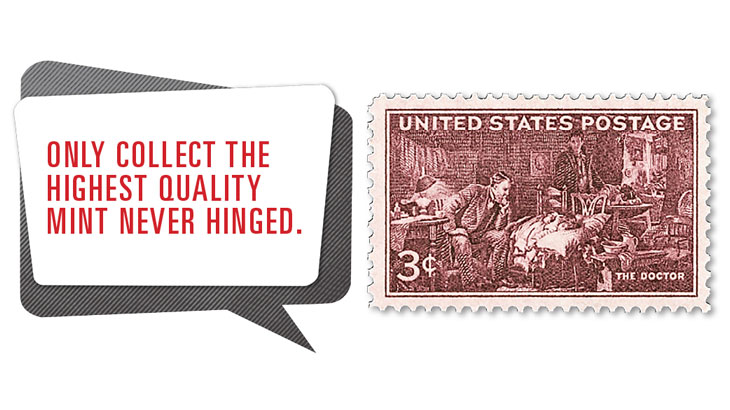 The winner of the philatelic part of the July cartoon caption contest featuring the 1947 3¢ Doctors issue is Peter Tuteur of St. Louis, Mo., who provides sound advice to collectors concerned with the value of their collection. The next cartoon caption con

About a third of entries were political and mostly critical of one or another politician. A couple of the writers even noted that they knew their entries could not be printed, but it pleased them to get their opinions off their chests.

Another third dealt with the COVID-19 pandemic in some way, and there were a few themes, summed up neatly by this entry from Roger Di Paolo of Stow, Ohio: “No mask, no social distancing. No wonder this kid is sick!”

The Postal Service’s recent issuance of a set of stamps for the world’s most recognized rabbit drew several entries. The first was “What’s up Doc? ONE stamp for us; TEN for Bugs Bunny! That wascally wabbit!” sent by David Vikan of Dickinson, N.D.

The design of the 3¢ Doctors stamp suffers from being crowded, plus the dark red brown color of the stamp makes the image muddy and difficult to see. This was noted by several entries, including this one from Ted Feldstein of Doylestown, Pa., “Doctors, Never keep patients in the dark about their condition.”

Connections to stamp collecting were on the mind of some entrants. Marc Chevalier of Tacoma, Wash., came up with this one, “Finding an inverted Jenny would send anyone into shock!”

Peter Tuteur of St. Louis, Mo., won the philatelic part of the contest with a line of special value to the collector/investor class.

“Sorry I can’t heal your torn Jenny,” from Bennett Bardfeld of Vineland, N.J.

“Mr. Black, I have a feeling your daughter Penny will one day make an important contribution to the field of philately,” from Steve Kotler of San Francisco, Calif.

“Tommy, this is the third time this month you’ve played sick to get out of school!” by Michael Tremel of Leland, N.C.

“Take two aspirins, but DON’T call me in the morning!” by Lawrence Segel of White Plains, N.Y.

“Safe at home, but at risk everywhere else!” from Peter Karpoff of Silver Spring, Md.

“Doc, I’m telling you, I was bitten in the neck by that guy standing over in the shadows,” by David Schwartz of Commack, N.Y.

Thanks and a tip of the hat to all who entered. The next contest will be announced in the Sept. 14 issue of Linn’s.