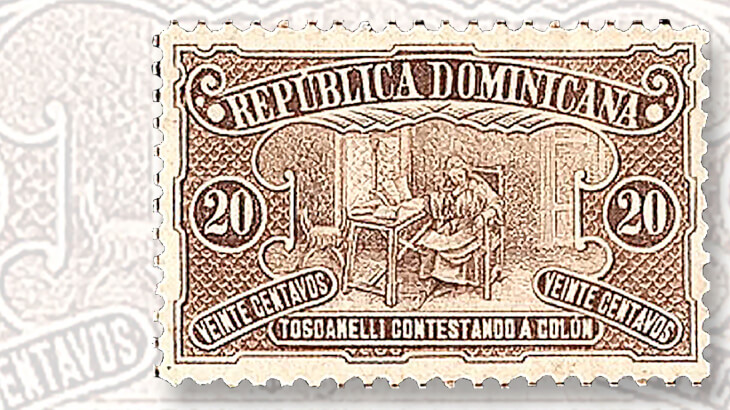 The Dominican Republic occupies roughly the eastern two-thirds of the Caribbean island of Hispaniola. Columbus made landfall on the island on Dec. 5, 1492, and the capital, Santo Domingo, is the oldest European-founded settlement in the New World. It is a very popular Latin American country with collectors in the United States.

In 1899-1900, the Dominican Republic issued a set of 11 Columbus-themed stamps (Scott 100-110A). Although they were postage stamps and not semipostals or postal tax stamps, the Dominican government hoped to raise funds to build a Columbus mausoleum by sale of the stamps to collectors who would not use them for postage.

The stamps in the set have intriguing and attractive designs, and the set is in demand from Dominican Republic, world classic, and Columbus topical collectors.

The 2016 Scott Classic Specialized Catalogue of Stamps and Covers 1840-1940 values the set in unused hinged condition at $111.75. This is a good price for the set, but if you are buying the stamps individually, the 20-centavo, 50c, 1-peso, and 2p stamps generally sell for more than Scott catalog value, while the other stamps in the set generally sell for less than catalog value.

In addition to the listed major-number stamps perforated gauge 11½, the stamps are also listed and valued as imperforate pairs, with values ranging from $3.50 to $70 in unused hinged condition. If you see these offered at Scott catalog value, they are an excellent buy.