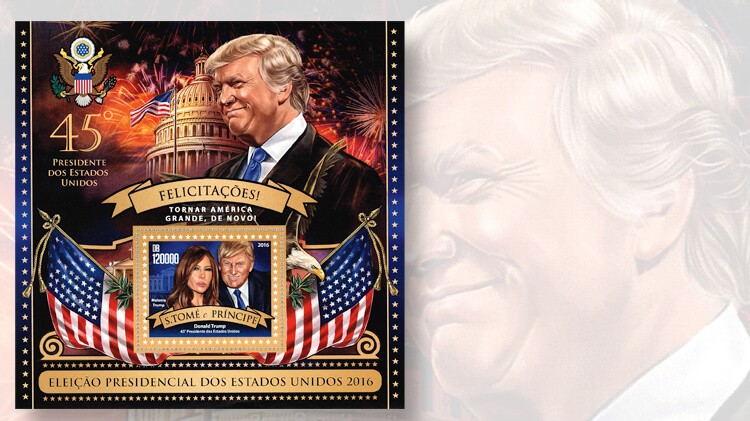 St. Thomas and Prince Islands issued this souvenir sheet offering congratulations to Donald Trump shortly after he was elected president of the United States on Nov. 8, 2016. 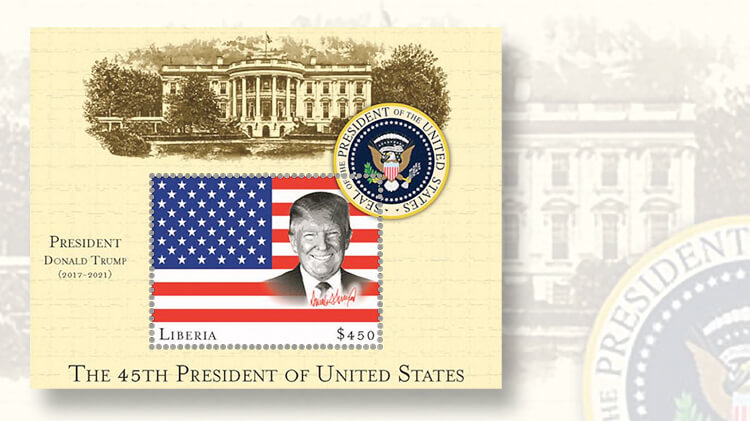 A souvenir sheet in Liberia’s U.S. Presidents series features Donald Trump as the 45th president. The series began in 2009.
Previous
Next

Even before the presidential inauguration on Jan. 20, Donald Trump had already been honored on a handful of stamps, including a few that commemorate him as president of the United States.

St. Thomas and Prince Islands, a former Portuguese colony and territory located in the Gulf of Guinea, is officially called the Democratic Republic of Sao Tome and Principe.

Its souvenir sheet with inscriptions in Portuguese that translate to “45th president of the United States” and “congratulations!” was issued Nov. 10, 2016, two days after the presidential election, according to information from Stamperija, the Lithuania-based worldwide distributor of the stamps of St. Thomas and Prince Islands.

The sheet contains a single stamp showing drawings of Melania and Donald Trump in the foreground, and the White House in the background. The denomination is 120,000 dobras, approximately U.S.$525.

Above the stamp is Portuguese for “Make America great again!” and below it is an inscription that relates to the 2016 presidential election.

Pictured in the selvage surrounding the stamp is the U.S. Capitol, the White House, the Great Seal of the United States, crossed flags, an American bald eagle, and fireworks.

The website of Stamperija also shows souvenir sheets from Djibouti and Sierra Leone that commemorate Trump’s election as president.

The Liberian President Trump souvenir sheet was issued Dec. 26, 2016, according to the website of the new-issue agency Inter-Governmental Philatelic Corp., located in Brooklyn, N.Y.

The Trump souvenir sheet follows the same style as the Obama sheet in the aforementioned issue of 2009.

The single stamp in the new sheet is denominated $450, approximately U.S. $4.80. The design shows Trump and his autograph in front of the U.S. flag.

Inscribed below the stamp is “The 45th President of the United States” and to the left is “President Donald Trump (2017-2021).”

The selvage also includes images of the Seal of the President of the United States and the White House.

As Linn's previously reported, Liberia also issued stamps before the election picturing both Trump and Democratic Party candidate Hillary Clinton, as did the Maldive Islands.