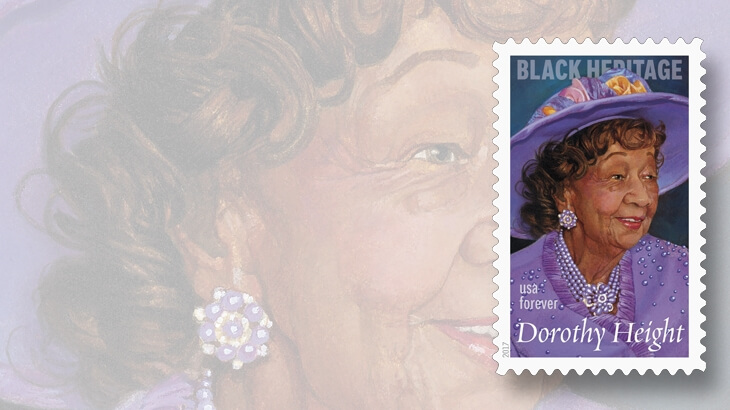 On Feb. 1, the United States Postal Service will honor civil rights leader and activist Dorothy Height as the subject of the 40th stamp in the USPS Black Heritage commemorative series.

The stamp, which is the 40th issue in the United States Postal Service’s Black Heritage commemorative series, will be offered in a pane of 20, offset printed by USPS contractor Ashton Potter USA Ltd., of Williamsville, N.Y.

The Black Heritage series began in 1978 with a 13¢ stamp honoring abolitionist Harriet Tubman (Scott 1744). One new stamp in the series is issued each year.

The first-day ceremony for the Dorothy Height stamp is scheduled for 11 a.m. and will take place at Cramton Auditorium at 2455 Sixth St.

The ceremony is free and open to the public, but space is limited and admission is not guaranteed.

Free tickets to the event are available from the Cramton Auditorium box office, which is open Monday through Friday from 10 a.m. to 5 p.m., or telephone 202-806-7194.

Noyes designed the stamp, which features artwork by Thomas Blackshear II, who created his portrait of Height using gouache and acrylics on board.

The painting is based on a 2009 photograph by Lateef Mangum, according to the Postal Service.

“The 40th stamp in the Black Heritage series honors Dorothy Height (1912–2010), the tireless activist who dedicated her life to fighting for racial and gender equality,” the Postal Service said. “Although she rarely gained the recognition granted her male contemporaries, she became one of the most influential civil rights leaders of the 20th century.”

Here is a full list of the Postal Service’s Black Heritage Stamps.

“Dorothy Height was a pioneer. She was a leader in the YWCA, a leader in her sorority — Delta Sigma Theta — as well as the head of NCNW (National Council of Negro Women).

“Long before some of the younger activists in the movement came to the forefront, like Dr. King and I, she was out there educating and empowering women, children and families in the South.

“Dorothy Height was also a feminist, and long before there was a women’s movement, she was a major spokesperson for women’s rights affirming the equality of women.”

Bart Barnes, in The Washington Post, wrote, “Ms. Height was among the coalition of African American leaders who pushed civil rights to the center of the American political stage after World War II, and she was a key figure in the struggles for school desegregation, voting rights, employment opportunities and public accommodations in the 1950s and 1960s.”

Born March 24, 1912, in Richmond, Va., Height graduated from New York University in 1933, earned a master’s degree two years later, and embarked on her passion for civil rights activism by joining the National Council of Negro Women while working as a welfare caseworker in New York City.

She was named council president in 1957 and remained in that office for more than 40 years.

Height is known for her work behind the scenes of the civil rights movement, but hers was an important voice that joined with those of Martin Luther King Jr., John Lewis, Roy Wilkins, Mary McLeod Bethune, Whitney M. Young Jr., and other prominent leaders.

She advised Eleanor Roosevelt in the 1930s, she stood with King as an organizer of the 1963 March on Washington, and she was an honored guest at the 2008 inauguration of President Barack Obama, who would call her “the godmother of the Civil Rights Movement and a hero to so many Americans.”

President Bill Clinton awarded Height the Presidential Medal of Freedom in 1994, and she also received the Congressional Gold Medal in 2004.

The Postal Service will offer an undisclosed quantity of press sheets with die cuts for the Dorothy Height forever stamp. Each press sheet will consist of six panes (120 stamps) and sell at face value for $58.80.

Black and digital color pictorial first-day cancels for the Dorothy Height stamp are being offered with floral elements.

Technical details for this stamp and first-day cancel ordering information can be found below.

Standard ordering instructions apply. Collectors requesting first-day cancels are encouraged to purchase their own stamps and affix them to envelopes. The first-day cover envelopes should be addressed for return (a removable label may be used), and mailed in a larger envelope addressed to FDOI — Dorothy Height, USPS Stamp Fulfillment Services, 8300 NE Underground Drive, Suite 300, Kansas City, MO 64144-9900. Requests for first-day cancels must be postmarked by April 1.