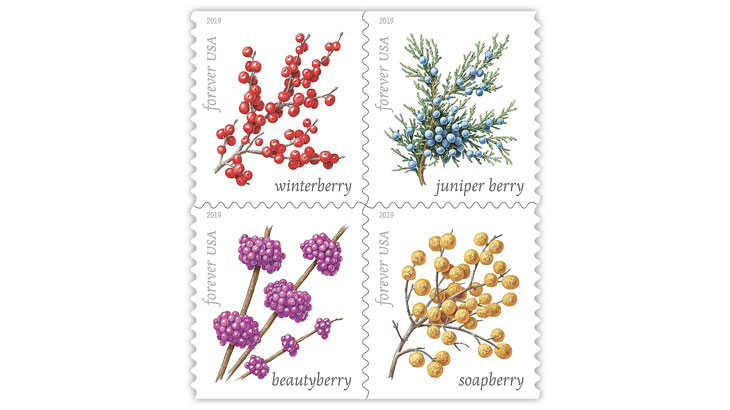 Four United States forever stamps depicting winter berries will be issued Sept. 17 in a double-sided pane of 20. A first-day ceremony will take place in Tulsa, Okla. 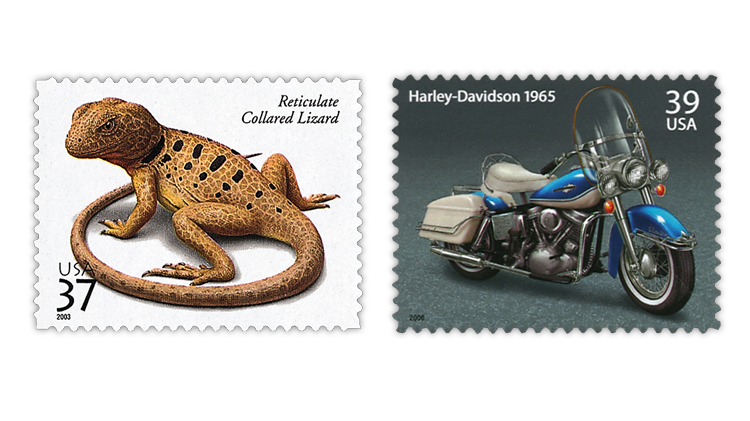 The new Winter Berries stamps are illustrated by artist Steve Buchanan. Among his many previous U.S. stamp illustrations are these two showing the reticulate collared lizard (in 2003) and a 1965 Harley-Davidson motorcycle (in 2006). 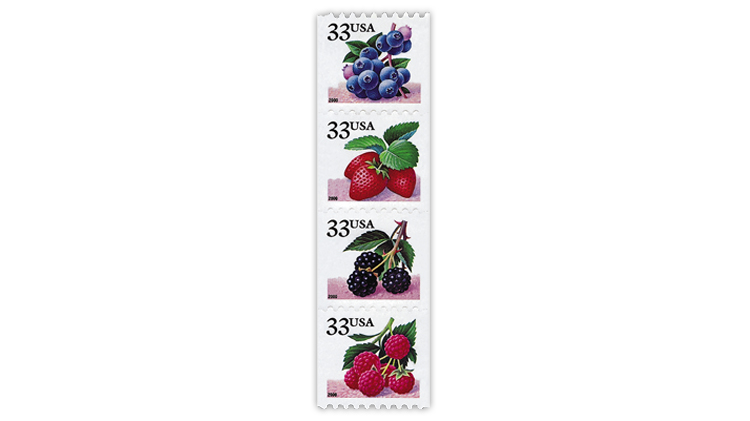 Berries were the subject of these four linerless coil stamps issued in 2000, and a similar set issued in 1999. 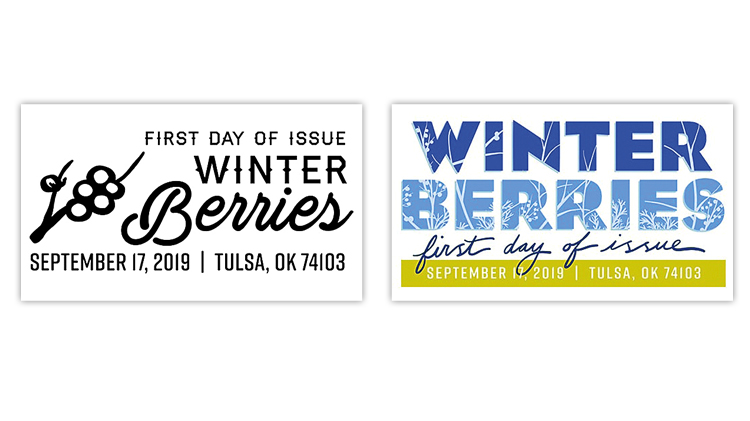 The Postal Service is selling two different sets of four first-day covers for the Winter Berries stamps, with either black or color pictorial postmarks.
Previous
Next

The United States Postal Service is issuing a set of four Winter Berries stamps Sept. 17. The nondenominated (55¢) forever stamps will be sold at post offices in a double-sided pane of 20, which the Postal Service describes as a booklet.

“The stamp art features highly detailed botanical portraits of each plant that highlight the bold colors and rich textures of their berries,” according to the Postal Service.

“The winter months may seem like a time when nature’s bold imagery gets muted by cold temperatures and snowfall — but if you take a closer look you may just find some of the most beautiful plant growth of any season. Coming in an array of shapes, sizes and colors, winter berries provide bursts of life during the year’s coldest months.”

The four varieties depicted on the new Winter Berries stamps are found in various regions across North America.

The common winterberry grows throughout the eastern United States, according to the U.S. Department of Agriculture, which adds that “the attractive bright red fruit of winterberry is eaten by small mammals and more than 48 species of birds.”

The winterberry grows on a shrub that reaches heights of 5 feet to 15 feet, with a smooth gray to black bark.

The juniper is a common coniferous plant, and its berries are the plant’s female seed cones.

Juniper berries have been used to flavor gin and other beverages, as well as certain food dishes. Some sources caution pregnant women and individuals with certain other medical conditions not to consume juniper berries.

The American beautyberry is native to several southern states from Texas to Maryland, found on shrubs that can grow up to 8 feet tall. Songbirds and other animals enjoy the clusters of berries, and humans have used them to make wine and preserves.

The soapberry featured in the new stamp set grows on a flowering deciduous tree that is found in the southern states. It gets its name from the saponins in the berry that create a foamy lather when mixed with water, and for that reason the soapberry has been used as a soap substitute.

The soapberry grows on a hardy ornamental shade tree that can reach 30 feet tall or more.

Among stamp collectors, however, Buchanan is best known for the pane of 20 33¢ Insects and Spiders stamps issued Oct. 1, 1999, in celebration of National Stamp Collecting Month (Scott 3351). The issue was among the top vote-getters in the 1999 Linn’s United States Stamp Popularity Poll.

“Buchanan specializes in natural science illustration and is best known for his botanical and entomological subjects,” according to the Smithsonian National Postal Museum.

He strayed from that niche in 2006, however, to illustrate the four subjects of the American Motorcycles set of 39¢ stamps issued that year (Scott 4085-4088).

Steven R. Phelps, the USPS acting vice president of pricing and costing, is the scheduled master of ceremonies.

The Postal Service encourages anyone planning to attend to register online in advance.

In the double-sided booklet format, the Winter Berries stamps are likely to see wider distribution than most U.S. commemorative stamps.

Berries have been featured previously on U.S. definitive stamps, including four 33¢ stamps celebrating familiar edible berries that were first issued in several formats in 1999 (Scott 3294-3305). Those designs depicting blueberries, raspberries, strawberries and blackberries were revised slightly the following year to create new stamps in a linerless coil (3404-3407).

The Postal Service is selling two different sets of four first-day covers for the Winter Berries stamps, with either black or color pictorial postmarks.

The black postmark shows a simple line drawing with a sprig of berries. The color postmark includes the words “WINTER BERRIES” in large block letters, with berries and branches visible within the individual letters.