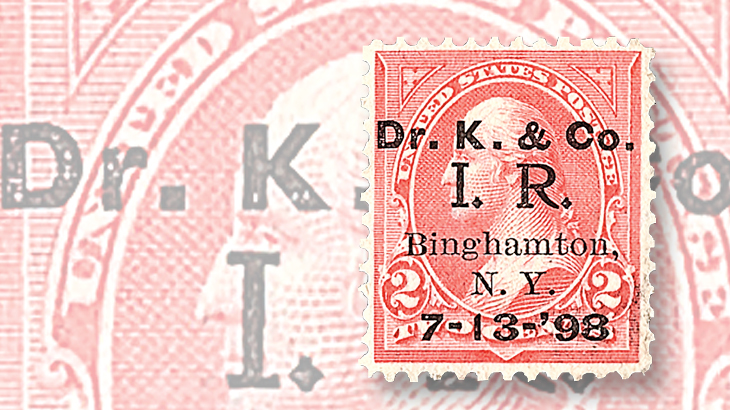 Private die proprietary revenue stamps, often referred to as match and medicine stamps because of the types of merchandise for which they were used to show payment of tax, is one of the most active segments of the American stamp market.

The stamps appeal to collectors on several levels: the sometimes arcane subject matter, the beautifully engraved designs, and the sometimes quaint products they advertise.

A less well-known type of these stamps was created by what the Scott Specialized Catalogue of United States Stamps and Covers calls precancel overprints on regular U.S. postage stamps (Scott 267a-268, 279 and 279Bg). These revenue stamps (Scott RS307-RS315) were produced in 1898 by Dr. Kilmer & Co. of Binghamton, N.Y.

Willis Sharpe Kilmer (1869-1940) was a promoter, horse breeder and newspaperman. His uncle, Dr. S. Andral Kilmer, developed a patent medicine sold under the name of Dr. Kilmer’s Swamp Root Tonic. It was extremely popular in the late 19th century.

Willis Kilmer’s father bought out his uncle’s business in 1892 and put his son in charge of marketing the product. He was soon in charge of the company.

The enterprise grew even more successful under the new management until the Pure Food and Drug Act of 1906 began requiring strict testing and labeling of ingredients.

In addition to revenue stamp collectors, these stamps also are of interest to collectors of regular postage stamps and to precancel collectors. Even great collections are often missing these private die proprietary revenue stamps.

With Scott catalog values ranging from $67.50 to $175, they are not exorbitantly expensive, but they are rarely seen on the market.

Read the notes in the Scott U.S. Specialized catalog for information on forgeries.