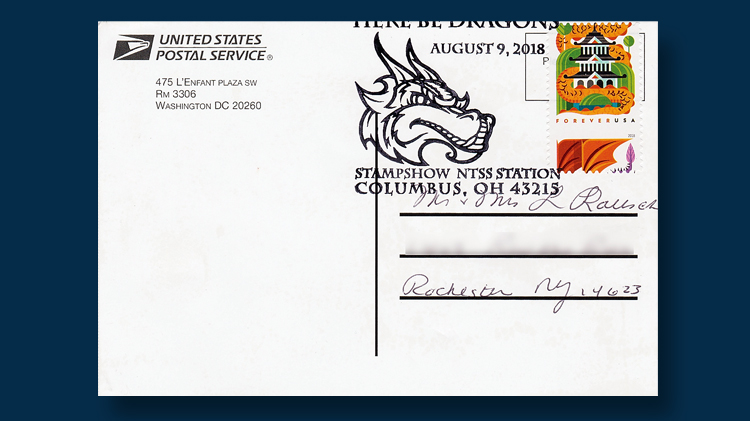 A postcard created by collector Larry Rausch, who found two panes of Dragons commemorative stamps that had die cuts shifted about ¾ inch upwards. He discovered the production freak after affixing the stamp to the postcard. 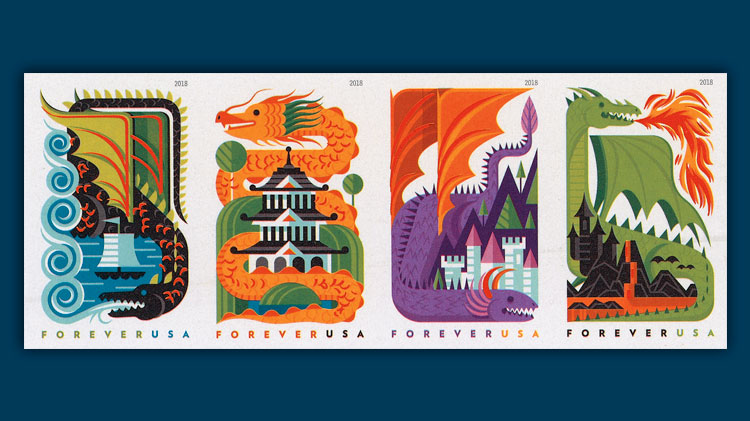 A strip of four Dragons forever stamps without die cuts, digitally cropped from an intact pane of 20 with misregistered die cuts. The American Topical Association discovered 13 error panes at its Aug. 9-12 summer show in Columbus, Ohio.
Previous
Next

The medieval theme of this summer’s biggest stamp show, with dragons, characters dressed in period costumes and the towering United States Postal Service booth built like a castle, all proved to be the perfect setting for an epic story of lore for stamps issued and sold at the show.

Set within a massive castle with a dragon peering out from the top, the Postal Service counter was selling the newly issued Dragons set of four stamps in panes of 16.

On the Aug. 9 issue date, the Postal Service sold Dragons stamp panes containing errors and freaks at the show, and two people reported their finds to Linn’s.

The odds of this happening at a stamp show are slim, but even more surprising is that there were two different error stamps sold at the show from USPS inventory. (See our report on The Art of Magic souvenir sheet error.)

It all makes for a legendary story for stamp collectors.

Linn’s booth at the stamp show was only steps away from the ATA booth, and Jack Congrove of the ATA was tasked with affixing Dragons stamps to covers for the society.

Congrove discovered he was unable to find die cuts separating the stamps on the bottom row of one of the sheets.

He quickly made his way to the Linn’s booth to show that he had 13 panes of 20 stamps with misregistered die cuts. The shift upward of approximately 2¼ inches created an error row of four imperforate Dragons stamps along the bottom.

The stamps in the top three rows all have die cuts present, but they go through the stamps halfway, creating 12 freak stamps.

The stamps were printed and processed by Banknote Corporation of America.

Scott catalog editors examined the sheet and said the error will be listed in Vol. 1 of the 2020 Scott Standard Postage Stamp Catalogue to be released in April 2019.

Stamp collector Larry Rausch also discovered two panes of Dragons forever stamps at the event with a different die-cut shift. He showed Linn’s a postcard that he created after he had peeled one of the stamps from the pane.

The misregistration of die cuts of approximately ¾ inch was not enough to create die-cut missing errors.

Pictured above is a postcard that Rausch addressed to himself but did not send after discovering the misregistered die cuts on the stamp.