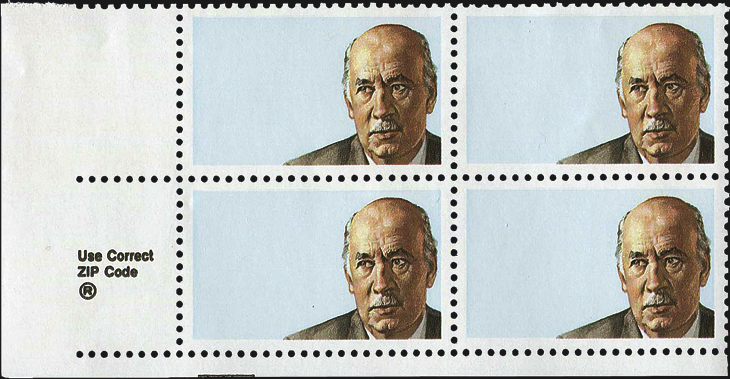 At the Chicagopex 2015 stamp show, Regency-Superior will hold a two-day auction of United States and worldwide stamps and covers, including this modern U.S. airmail error ZIP block.

A dramatic modern United States airmail error is being offered during the Nov. 21-22 auction by Regency-Superior.

The sale is taking place in the Chambers Lecture Hall at Westin Chicago Northwest Hotel, 400 Park Blvd., in Itasca, Ill., west of Chicago’s O’Hare International Airport. The auction is being held in conjunction with the Nov. 20-22 Chicagopex 2015 stamp show and exhibition at the same hotel.

The error is the 1988 36¢ multicolor Igor Sikorsky airmail stamp with the intaglio red, blue and black ink absent, an omission that eliminates the text and numeral inscriptions, as well as the image of the 1939 VS300 helicopter that normally appears on the stamp (Scott C119a).

The stamps come from the only known pane of 50 with the color-omitted error. One stamp on the error pane has a small vertical line of extraneous red ink; that stamp, from position 3, is not offered in this current auction.

Because only one pane of 50 error stamps is known, the ZIP block is believed to be unique.

The stamps are described by Regency-Superior as post office fresh and extremely fine. Each is accompanied with a copy of the 2012 Philatelic Foundation certificate (No. 501239) certifying the full pane.

The single error stamp is listed with a value of $2,500 in the 2016 Scott Specialized Catalogue of United States Stamps and Covers, and in the 16th edition of the Scott Catalogue of Errors on U.S. Postage Stamps by Stephen R. Datz. The value is listed in italics in these catalogs, which indicates an item that trades infrequently.

The U.S. issues in this sale include a nice selection of classic plate blocks, some full panes, attractive mint and used singles and multiples, and postal history.  Essays, proofs and specimens are also on offer, along with U.S. possessions and other back of the book material. Worldwide singles and sets include Great Britain and British Commonwealth, and collections of United States and worldwide material will be offered as well.

Full details of the auction lots are posted on the Regency-Superior website, where information about online bidding and other bidding options is also available.