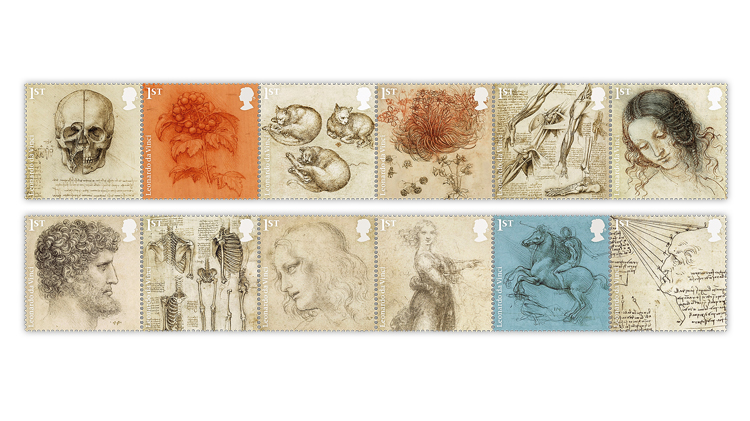 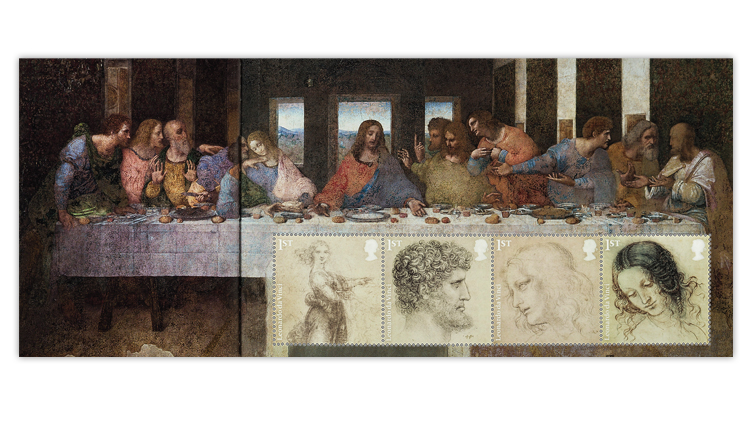 Royal Mail's new prestige booklet, Leonardo da Vinci 500 Years, includes four panes of stamps along with text and other illustrations. One pane of four stamps depicts da Vinci’s The Last Supper in the background. The stamp showing a drawing of the head of
Previous
Next

In conjunction with the 500th anniversary of da Vinci’s death, the 12 drawings shown on the stamps plus 132 others from the Royal Collection are being shown in 12 simultaneous exhibitions across the United Kingdom Feb. 1-May 6. This nationwide event is called “Leonardo da Vinci: A Life in Drawing.”

Born April 15, 1452, in Vinci, Tuscany, da Vinci died at Clos Luce, France, May 2, 1519. Perhaps best known for his paintings Mona Lisa and The Last Supper, he also was an inventor and much, much more.

A website devoted to his inventions, www.da-vinci-inventions.com, said: “The term ‘Renaissance man’ comes from fifteenth-century Italy and refers to the idea of a person with knowledge and skills in a number of different areas. Perhaps, no single individual defines the idea of a Renaissance man better than Leonardo da Vinci — an artist, scientist, architect, engineer and inventor.”

According to a press release from Royal Collection Trust, the drawings selected for “Leonardo da Vinci: A Life in Drawing” reflect the full range of his interests: anatomy, architecture, botany, cartography, engineering, geology, music, painting and sculpture.

The press release also said, “Few of his surviving drawings were intended for others to see: drawing served as his laboratory, allowing him to work out his ideas on paper and search for the universal laws he believed underpinned all of creation.”

The 12 stamps from Royal Mail are in two strips of six with the designs se-tenant (side-by-side). The strips are printed in separate sheets of 60 (sold in panes of 30 at most postal outlets).

The stamps are also included in a prestige booklet, called Leonardo da Vinci 500 Years. Royal Mail said: “Written by Martin Clayton, head of prints and drawings at Royal Collection Trust, this richly illustrated book explores the many facets of Leonardo da Vinci — his drawings, the materials he used, his paintings, his sculptures and his work as an anatomist.”

Clayton also wrote the text for the presentation pack.

The stamps are nondenominated, each paying the first-class rate (currently 67 pence).

Starting on the left on the first strip, the first stamp shows a 1489 pen-and-ink drawing of a sectioned skull. The information about the dates and types of drawings shown on the stamps is from Royal Mail’s presentation pack.

The next three stamps feature flora and fauna: sprig of guelder rose (Viburnum opulus) drawn in red chalk on orange red paper, circa 1506-12; a pen-and-ink study of three cats, circa 1517-18; and a star-of-Bethlehem and other plants in pen and ink over red chalk, circa 1506-12.

The fifth stamp shows the anatomy of the shoulder and foot, a pen-and-ink with wash drawing, circa 1510-11.

Completing the first strip of six is the head of Leda, a pen-and-ink over black chalk drawing, circa 1505-08. This drawing and the aforementioned drawing of a star-of-Bethlehem were studies for a painting illustrating the myth of Leda and the swan. The painting is believed to have been destroyed in the 18th century.

All six of the stamps in the second strip show people in some form, starting with a black chalk drawing, circa 1517-18, of the head of a bearded man.

The second stamp depicts an anatomical study of a skeleton in pen and ink with wash. According to information in the presentation pack, most of da Vinci’s anatomical studies were done in the winter of 1510-11 at the medical school of the University of Pavia near Milan.

Illustrated on the third stamp is the head of St. Philip. This black chalk study, circa 1495, was for the mural The Last Supper, painted in the late 15th century in the refectory of the Convent of Santa Maria delle Grazie in Milan.

The fourth stamp depicts a woman in a landscape, a black chalk drawing, circa 1517-18.

Illustrated next is a silver-point drawing on blue prepared paper of the design for an equestrian monument of Francesco I Sforza of Milan, circa 1485-88. The monument was never completed.

The last stamp in the strip features a pen-and-ink drawing, circa 1488, showing how light falls on a face.

Kate Stephens designed the stamps, using images from the Royal Collection Trust. In addition to the drawings, the designs include “1st” and the silhouette of Queen Elizabeth II in the upper corners and the text “Leonardo da Vinci” reading up from the bottom left corner.

The stamps are square, 35 millimeters by 35mm, perforated gauge 14.5. International Security Printers printed them by lithography.

The prestige booklet contains four panes of stamps. Three of them include stamps of the new Leonardo da Vinci issue, one of them with The Last Supper pictured in the background.

Other products offered are first-day covers, 12 postcards reproducing the designs of the stamps, and the aforementioned presentation pack with all 12 stamps.